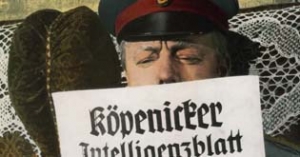 The Captain of Koepenick

People have been laughing about the daring prank of the "Captain of Koepenick" for about half a century, on which Carl Zuckmayer based his stage play. This is the tragicomical story of the Berlin shoemaker Wilhelm Voigt who donned an old captain′s uniform, "arrested" the mayor of Koepenick and "confiscated" the city treasury containing over four thousand Marks. He exploited the blind obedience to state authority because, under the regulations of bureaucracy, there was no place for him.