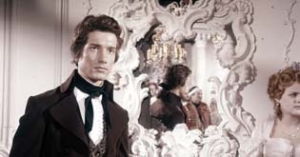 Duel in the Forest

The film is set in 1802 and tells the story of Hans Bückler, called "Schinderhannes", who during the Napoleonic Wars, fought against the French occupiers and landowners who exploited German farmers. Then, the French become allies with German authorities. Although Bückler is at first rather successful, his identity is still betrayed to the authorities. His beloved Julchen, who is expecting a child from him, leaves him to save herself and the baby. When Schinderhannes learns about his child he wants to meet Julchen – but this turns out to be a trap. Together with most of his men, Bückler is finally captured and executed.

Based on the play by Carl Zuckmayr.