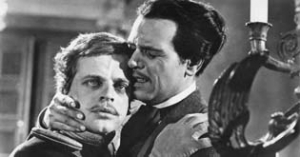 The life of the Bavarian "Swan King", filmed almost exclusively on original locations. The film begins with Ludwig′s funeral procession and tells the story of his life in flashbacks. As a young man with high ideals and best intentions, Ludwig ascends to the Bavarian throne. But between 1866 and 1871, the creation of the German Empire, Ludwig grows more and more frustrated as Bavaria becomes a mere vassal of Prussia although Bismarck is still raving about the "last great monarch". Because of his admiration for Richard Wagner, who brazenly takes advantage of him, Ludwig falls out with his advisors. Furthermore, he has to cut himself off from his great love, Empress Elisabeth of Austria, "Sissi", and Sissi′s sister Sophie does not understand him anymore. Thus, Ludwig withdraws himself more and more.

His extravagant lifestyle and the building of his castles threaten him to be placed under disability. Finally, Ludwig is detained on a castle at Starnberger Lake. One night, the dead bodies of Ludwig II and his psychiatrist, Dr. Gudden, are found in the Starnberger Lake.