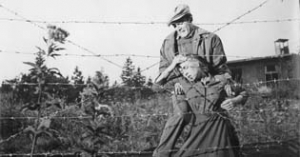 One of the few German films of the 1950s that deals critically with contemporary conditions. Young Anna Kaminski is living right at the inner German border in Thuringia. Her son, whose father got killed in the war, is living with his grand parents in Bavaria, just a few kilometres away, in West Germany. To see him regularly, Anna is clandestinely crossing the border. On one of her crossings, Anna meets the Bavarian border policeman Carl Altmann. The West German helps Anna to get her son illegally to East Germany, and then they fall in love with each other. But the only place where they can meet is an abandoned train station between the borders. Finally, Anna wants to flee with her son to the West sector but the border becomes more and more tight – and the story of their love takes a tragic, and fatal end.