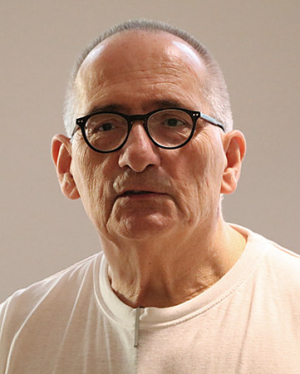 Dominik Graf at the DFF - Deutsches Filminstitut & Filmmuseum in Frankfurt on March 10, 2017

Dominik Graf was born September 6, 1972, as the son of the actors Selma Urfer and Robert Graf. In 1972, he took up German language and literature studies as well as musicology at the University of Munich. In 1974, however, he switched to the Academy for Television & Film (HFF), where he shot the short film "Carlas Briefe" during his first academic year. In addition to his studies, he wrote screenplays for the TV series "Auf Achse". Furthermore, he played small roles in feature films such as "Der Mädchenkrieg" (1977, Alf Brustellin, Bernhard Sinkel). He also took on the leading role in Heidi Genée's comedy "1 + 1 = 3" (1979).

He received the Bavarian Film Award for his graduation film "Der kostbare Gast" (1979). Subsequently, Graf concentrated on his television work and directed several episodes for series such as "Familientag" and "Köberle kommt". With his work on the TV series "Der Fahnder" and the "Tatort" episode "Schwarzes Wochenende" (1985), Graf was able to establish himself as a specialist for action and crime movies.

Mostly produced by the Bavaria Atelier GmbH, some of his movies have also found their way onto the big screen, e.g. "Treffer" (1984), a movie depicting the dreams of three adolescent motorcyclists, and "Tiger, Löwe, Panther" (1989), a drama about three women around their thirties trying to get away from their daily lives. With the TV movie "Bei Thea" (1986), Graf established himself as a sensible director of films depicting German-Jewish issues. His attempts at comedic filmmaking, however, turned out to be less successful. Examples include the 1985 comedy "Drei gegen Drei" (starring the German band "Trio"), the genre mixture "Spieler" (1990), and the Bavarian doctor"s skit "Dr. Knock" (1997).

His action movies, on the other hand, have been praised for their tension-filled plot constructions as well as the professional directing. His thriller movie "Die Katze" ("The Cat", 1987), depicting a bank robbery with hostage-taking, won him the German Film Award for Best Director. Leading actor Götz George also starred in the ecological thriller series "Morlock", for which Graf contributed the movie "Die Verflechtung" (1992). While the ensemble film "Die Sieger" (1994), revolving around the members of a special police unit and produced with great expense by Günter Rohrbach, flopped at the box office, critics praised the movie as a technically outstanding genre piece.

During the following years, Dominik Graf worked mostly for television. As far as his choice of subjects is concerned, he kept switching between controversial genre pieces such as "Sperling und der brennende Arm", melodramas such as "Bittere Unschuld" (starring Elmar Wepper in the leading role), and poetic movies such as "Die Freunde der Freunde".

In 2002, Graf returned to the cinema with the disputed movie "Der Felsen" ("A Map of the Heart"). Depicting the amour fou between a teenage delinquent and an adult woman, the film premiered at the Berlin International Film Festival and caused controversial reactions – not least because Graf and his cinematographer Benedict Neuenfels had shot the movie on video both for cost reasons and out of aesthetic considerations.

Subsequently, Graf directed two more highly-praised TV productions: "Hotte im Paradies", in which he told the story of an unsuccessful Berlin pimp, and "Kalter Frühling", a drama depicting the story of a young woman who weaves a web of intrigues in order to take over her parent's business. After finishing work on "Der rote Kakadu" ("The Red Cockatoo"), a big screen movie in which he depicted the story of the legendary Dresden dance club of the same name, Graf returned to television again. His crime movie "Er sollte tot", which was part of the "Polizeiruf 110" series, contained scenes of such severe violence that the TV station ARD decided to offer its audience an online discussion with the director after the broadcast.

For his work on "Eine Stadt wird erpresst", in which he depicted both a criminal case and the downfall of East Germany's countryside, Graf received rave reviews once again. Graf then took on a completely different topic in "Das Gelübde" ("The Vow", 2007), a period piece about the relationship between Clemens von Brentano and the nun Anna Katharina vom Emmerick. Two years later, he won another Grimme Award for "Kommisar Süden und der Luftgitarrist" starring Ulrich Noethen and Martin Feifel.

Following his contribution to the omnibus film "Deutschland 09 - 13 kurze Filme zur Lage der Nation", Dominik Graf started working on his most ambitious project to date: The ten-part TV miniseries "Im Angesicht des Verbrechens" is an intricate crime saga about the Russian Mafia in Berlin. Although the 10 million Euro production had to overcome several problems, the project was an overwhelming critical success: After its premiere at the 2010 Berlin IFF and its first run on the Arte and ARD networks, the series went on to win multiple awards.

At the 2011 Forum section of the Berlinale, Graf presented "Komm mit nicht nach" ("Don't Follow Me Arund") as his contribution to "Dreileben", a highly anticipated collaboration between Graf and directors Christian Petzold and Christoph Hochhäusler: Each of them independently made one film, which was to be connected to the others by the shared narrative motif of the search for an escaped murderer. In 2012 the trilogy won the Grimme Award. "Cassandras Warnung", another entry in the TV series "Polizeiruf 110", premiered at the 2011 Munich Film Festival.

The same year, the TV crime drama "Das unsichtbare Mädchen", starring Elmar Wepper as an aging police detective, was screened at the Hofer Filmtage before being aired in 2012. At the 2012 Berlin IFF, Graf presented "Lawinen der Erinnerung", a documentary feature about the late filmmaker Oliver Storz, who passed away in 2011.

In 2013, for the first time after 18 years, he directed another "Tatort": Set in Munich the episode tells about the decline of a wealthy family while broaching issues of gentrification and corruption in the construction business. Critics lauded the thriller for its unconventional and challenging style.

At the Berlin IFF 2014, Dominik Graf's first theatrical picture in eight years premiered in the competition: "Die geliebten Schwestern" ("Beloved Sisters") tells the story of poet Friedrich Schiller's relationship with two aristocratic but impecunious sisters. At the Bavarian Film Awards, the historical drama won the award for Best Cinematography. Graf's filmic TV-essay about the history and the "soul" of German television called "Es werde Stadt!" attracted some attention when it was screened in April 2014 on the occasion of the 50th anniversary of the Grimme Award. The following summer, Graf's "Heimat" crime film "Die reichen Leichen. Ein Starnbergkrimi" (TV) premiered at the Filmfest München just shortly before "Die geliebten Schwestern" opened in the theaters.

Also in 2014, the "Polizeiruf 110" episode "Smoke on the Water" was broadcast, with Matthias Brandt as police inspector Hanns von Meuffels.

A very personal project was the documentary film "Was heißt hier Ende?" ("Then Is It the End?", 2015), a mixture of homage and filmic obituary to the film critic Michael Althen (1962-2011), a close friend of Graf's with whom he shot the essay films "Das Wispern im Berg der Dinge" ("A Whispering In the Mountain of Things", 1997) and "München - Geheimnisse einer Stadt" ("Munich: Secrets of a City", 2000). Graf is also a member of the jury for the Michael Althen Prize for Criticism, founded in 2012.

Graf's "Verfluchte Liebe Deutscher Film" ("Doomed Love: A Journey Through German Genre Films", co-directed with Johannes F. Sievert), a documentary about the German genre cinema of the 1970s and 1980s, premiered in the Forum section of the Berlinale 2016; a year later, the sequel "Offene Wunde deutscher Film" ("Open Wounds – A Journey through German Genre Films"), about obscure and marginal German genre films, was also shown in the Forum section. In between, Graf's thriller "Die Zielfahnder - Flucht in die Karpaten" (2016) was broadcast on television, and he realized "Am Abend aller Tage", a drama about art, love, deceit and guilt, partly based on Henry James' novella "The Aspern Papers" (1888) and strongly inspired by the case of the Munich art collector Cornelius Gurlitt (1932-2014).

While "Am Abend aller Tage" toured various festivals in 2017, Graf's "Tatort" episode "Der rote Schatten" provoked heated discussions: The Stuttgart investigator duo Lannert and Bootz are confronted with the aftermath of the Red Army Faction (RAF) terror and look into a possible conspiracy over Stammheim prison and the night of the suicides of RAF leaders Andreas Baader, Gudrun Ensslin und Jan-Carl Raspe. Some historians accused Graf of a "dangerous" mixture of fact and fiction, and sometimes even of "RAF propaganda" (according to Stefan Aust); the film was, however, largely reviewed positively by critics.

Graf's documentary "Philip Rosenthal - Der Unternehmer, der nicht an den Kapitalismus glaubte" about the porcelain manufacturer, design professor and SPD politician Philip Rosenthal was more likely to achieve consensus. The film celebrated its premiere at the Hofer Filmtage 2017, where Graf also received the Hans-Vogt-Filmpreis, awarded to filmmakers who are "innovatively and carefully concerned about the expression and quality of their film sound".

In 2018, "Am Abend aller Tage" was also shown on television. Meanwhile, Graf's new television play went on a festival tour: "Hanne", about a newly retired woman (Iris Berben) who spends a weekend in a strange city with strange people, after learning that she is potentially terminally ill.

In 2019 the tireless Dominik Graf shot another feature film: The adaptation of the Erich Kästner novel "Fabian", with Tom Schilling in the title role of an advertising copywriter in the Berlin of the 1920s.

Finally, his adaptation of the Erich Kästner novel "Fabian oder Der Gang vor die Hunde" ("Fabian – Going to the Dogs") premiered in the Competition of the Berlinale 2021 online due to COVID-19 restrictions.

Since 1990, Graf shared a professorship with Peter Lilienthal and Peter F. Bringmann at the Academy for Media Arts in Cologne. Since 2004, he holds a professorship for Feature Film Directing at the International Filmschool Cologne.