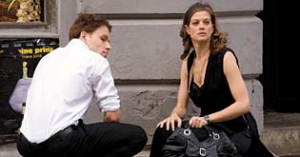 In Face of the Crime

When Marek Gorsky is 14 years old, his older brother is shot on a dark Berlin street corner by criminal rivals. At the crime scene the boy sees the police’s chalk outline of the body on the pavement. The image remains stuck in his memory for a very long time. Some years later Gorsky joins the Berlin police force. Nobody there knows about his past, not even his partner Lottner. Not until the two of them are shifted to the office of criminal investigation and the shadow of Gorsky’s Russian-Jewish past catches up with him.

The series describes the rise of the policeman Gorsky and his battle against organized structures. The milieu is described authentically, portraying the emotions and mentalities of other ethnic groups and their religious roots, their family life, their traditions and their celebrations. The series examines the present day, showing a panorama of different societies and travelling into their different worlds: from rural environs to the urban life of Eastern Europe and back again and again to Berlin.

Dominik Graf’s ten-part TV series à 49 minutes, "Im Angesicht des Verbrechens", is based on original scripts by Rolf Basedow. It tells of criminal energy, of the lures and temptations of the milieu, but also of the people who want to change something, have ideals, believe in the community and fight for it side by side. Each and everyone here is searching in their own way for the big money, the lucky break and the perfect love.