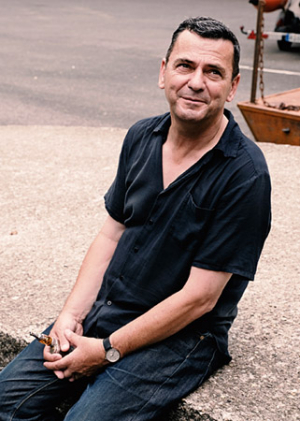 Christian Petzold was born September 14, 1960, in Hilden, as the oldest of three sons. He grew up in Haan, where he went to school and finished his high school degree in 1979. After finishing civil service, Christian Petzold went to Berlin in 1981 and started to study German studies and dramatics at Freie Universität Berlin. After his graduation in 1989, Petzold continued to study at Deutsche Film- und Fernsehakademie Berlin (dffb). During his studies, Christian Petzold worked as an assistant director for Hartmut Bitomsky and Harun Farocki – who contributed to all of Petzold's later feature films – and worked as a film critic for several newspapers and magazines.

In 2000, Petzold followed his critically praised TV movies "Cuba Libre" and "Die Beischlafdiebin" with the movie production "Die innere Sicherheit" ("The State I Am In"). Besides the German movie award in Gold for best film, the intense drama about a young adolescent and her parents who are wanted as terrorists won numerous awards and finally turned Christian Petzold into one of the most influential filmmakers of contemporary German cinema.

In 2001, the director collaborated with actress Nina Hoss for the first time in the highly praised TV thriller "Toter Mann" ("Something to Remind Me"). The film won an Adolf Grimme award as well as the German TV award. Nina Hoss also played a leading role alongside Benno Fürmann in Petzold's next film for the movie screen: "Wolfsburg" won the FIPRESCI award at the 2003 Berlin International Film Festival and in the same year also won the Adolf Grimme award in Gold.

Petzold's recurring creative collaborators include the cinematographer Hans Fromm, the editor Bettina Böhler, the production designer K.D. Gruber, and the composer Stefan Will. The team also finished Petzold's "Gespenster" ("Ghosts") that saw Julia Hummer – who had already made a strong performance in "Die innere Sicherheit" – and Sabine Timoteo as dropouts who are wandering through an equally inhospitable- and unreal-looking Berlin.

"Yella", on the other hand, tells the story of a young woman who wants to start a better life until her past catches up with her. Nina Hoss made a memorable performance in the title role and won the Silver Bear as Best actress at the 2007 Berlin International Film Festival and the German Film Award in 2008.

The next cooperation between Petzold and Hoss followed in 2008 with "Jerichow", the story of a fatal love triangle also starring Benno Fürmann and Hilmi Sözer. Alongside directors Christoph Hochhäusler and Dominik Graf, Petzold then worked on "Dreileben". For the unusual project, each of the three filmmakers made one part of the thriller triptych. Petzold's contribution, titled "Etwas Besseres als den Tod", premiered with the works of Graf and Hochhäusler in the Forum section of the 2011 Berlin IFF.

The following year, his film "Barbara" was included in the competition of the Berlin IFF: The film about a physician (played by Petzold regular Nina Hoss), whose plan to flee from the GDR to the West is altered when she falls in love with a colleague, got rave reviews and Petzold himself was awarded the Silver Bear for Best Direction. At the German Film Award 2012 the film won the Silver Lola for Best Picture. In 2013, the city of Düsseldorf honored Petzold with the Helmut-Käutner-Preis.

Petzold's "Phoenix" premiered at the 2014 Toronto International film Festival. The film's script was to be his last collaboration with Harun Farocki, who passed away in July 2014. The post-war drama was very well received by critics and garnered numerous international awards, including the FIPRESCI Award at the San Sebastián International Film Festival and the German Film Award for Best Female Supporting Actor, which went to Nina Kunzendorf.

In May 2017, Petzold began production on his next feature film, a loose adaptation of Anna Segher's novel "Transit". The film premiered in Competition at the Berlin Film Festival 2018. Petzold received the Bavarian Film Prize for the screenplay; he was also honoured with the Julius-Campe-Prize for his merits for German literature, with special reference to "Transit". At the Neisse Film Festival he received an award for his cinematic work. Also in 2018, Petzold was invited to become a member of the Los Angeles-based Academy of Motion Picture Arts and Sciences, which among other things awards the Oscars.

Christian Petzold's next feature film "Undine", a modern interpretation of the Undine myth, premiered in the Competition of the Berlinale 2020; as in "Transit", Paula Beer and Franz Rogowski star in the leading roles. Only a few weeks later, at the end of March 2020, Petzold was awarded the Schiller Prize of the City of Mannheim, which honours personalities who "have made an outstanding contribution to cultural development through their work".

Christian Petzold is married to the documentary film maker Aysun Bademsoy and lives with his family in Berlin-Kreuzberg.