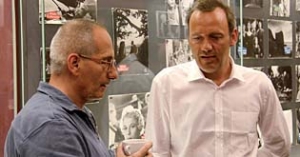 "Eye to Eye - All About German Film"

This is not merely another film about cinema history; it is a film about the love of cinema, a journey of discovery through over a century of German film history. Ten people working in film today remember their favourite films of yesteryear: Tom Tykwer talks about Friedrich Wilhelm Murnau′s "Nosferatu", Wolfgang Kohlhaase about "Menschen am Sonntag" by Robert Siodmak and Edgar G. Ulmer; Wim Wenders about "M" by Fritz Lang; Christian Petzold about Helmut Käutner′s "Unter den Brücken", Hanns Zischler about Alexander Kluge′s "Abschied von Gestern", Andreas Dresen about "Solo Sunny" by Konrad Wolf, Michael Ballhaus about Rainer Werner Fassbinder′s "Ehe der Maria Braun", Dominik Graf about "Rocker" by Klaus Lemke, Doris Dörrie about "Alice in den Städten" by Wim Wenders and Caroline Link about Edgar Reitz′ first "Heimat" cycle. Their personal memories are interspersed with film excerpts.

These ten declarations of love are complemented by five cinematic essays: the city of Berlin as seen in film, cinema under National Socialism, the cinema of the GDR, a cinematic journey through Germany, and the question: what makes German cinema German? Finally, six different kinds of images are shown – men′s eyes, women′s gazes, kisses, screams, smoking, making a phone call – all taken from different films and different eras in the history of German cinema. In fact, this film could be interpreted as a kind of cinematic guessing game – since it includes references to around 250 German films. And those who find their own memories triggered by this documentary will hopefully feel inclined to watch these old films again themselves.