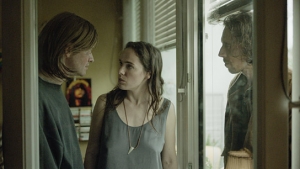 Verena Altenberger was born in Schwarzach im Pongau, Austria on November 11 1987. She was a journalism and communications major before studying acting at the Musik und Kunst Privatuniversität in Vienna from 2011 to 2015. Already as a student, Altenberger appeared on stage and on TV: As a member of the Junge Burg Ensbemble, she starred in productions of plays like "Alice im Wunderland" and "Bonnie und Clyde", and from 2013 until 2015, she performed at the Burgtheater, the Theaterbrett and at the Wiener Volkstheater. On TV, she guest-starred in series like "Schnell ermittelt" (2012) and "SOKO Donau" (AT 2013), and she also had a recurring role as a prostitute in "CopStories" (2013-2014).

Following her graduation, Altenberger appeared in supporting roles in "Das Geheimnis der Hebamme" (2016, TV), "Der Hafenpastor und das Blaue vom Himmel" (2016, TV) and the TV series "Lena Lorenz" (2016/17). Director Stefan Ruzowitzky cast her as the protagonist's cousin, who is hunted by a psychopath, in his thriller "Die Hölle – Inferno" (AT/DE 2016). Her performance as a Polish nurse who takes care of the cantankerous grandmother of a German family in the series "Magda macht das schon" (2017) earned her a Best Female Actor nomination at the Deutsche Comedypreis.