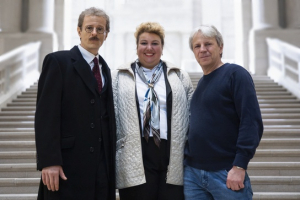 In November 2001, Murat Kurnaz, a Turk born and raised in Germany, is arrested during a routine check while in Pakistan. Suspected of being a terrorist, he ends up in the notorious U.S. prison camp in Guantánamo in early 2002. But although his innocence is soon proven, he remains in custody because the Turkish government does not intervene, and the German government rejects an American offer. Meanwhile, Kurnaz's mother Rabiye begins an almost hopeless fight to get her son released: Together with human rights lawyer Bernhard Docke, she files a lawsuit against the American government. This step catapults the Turkish housewife from her terraced house in Bremen directly into world politics. The grueling legal process drags on for years, leading the Kurnaz-Docke duo all the way to the U.S. Supreme Court.