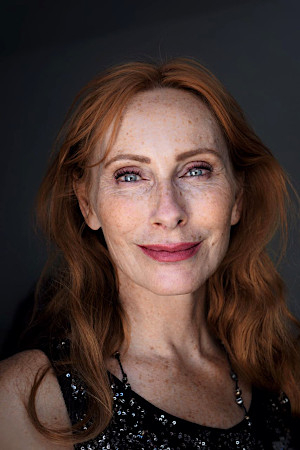 Andrea Sawatzki was born on 23 February 1963 in Kochel am See. After graduating from high school, she trained at the Neue Münchner Schauspielschule until 1987, followed by an internship at the theatre Münchner Kammerspiele. Until 1992 she had engagements at various theatres in Stuttgart, Wilhelmshaven and Munich.

At the same time Sawatzki began her film and television career. She made her debut in front of the camera in 1987 under the direction of Dieter Dorn with a small role in his stage adaptation of Goethe's "Faust"; before that she had already belonged to the ensemble in Dorn's theatre version.

It was not until the early 1990s that Sawatzki began to appear more regularly in TV productions, and from 1993 onwards she worked almost entirely for television and cinema productions. She initially played smaller guest roles in series such as "Tatort" (e.g. "Der Fall Schimanski", 1991) and "Der Fahnder" (1993), and had a recurring supporting role in the truck driver series "Auf Achse" (1993, five episodes). From 1995 to 1998, she supported the title private detective Alexander Stein (Klaus J. Behrendt) in his investigations as call girl Sonja in the crime series "A.S. - Gefahr ist sein Geschäft"; during the filming she met her future husband, actor Christian Berkel.

Between 1995 and 2004, Sawatzki was part of the investigative team in seven episodes of the crime series "Polizeiruf 110". She had further guest roles on TV, among others in "Helden haben's schwer" (1996; as the lover of an adventurous writer) and in the comedy "Und alles wegen Mama" (1998; as the wife of a mean commissioner). Dieter Wedel cast her in the six-part "Der König von St. Pauli" (1998) as the wife of a corrupt politician. She was nominated for a Grimme Prize together with Armin Rohde for the leading role in the cult thriller "Apokalypso - Bombenstimmung in Berlin" (1999).

In addition to her numerous television roles, Andrea Sawatzki also appeared regularly in feature films between 1996 and 2002. In "Die Mutter des Killers" ("The Killer's Mother", 1996) she turned Dieter Landuris' head as a femme fatale; in the Ingrid Noll film adaptation "Die Apothekerin" ("The Pharmacist", 1997) she was the mentally unstable wife of an unfaithful man; in the box-office hit "Bandits" (1997) she chased the titular women's rock band as a policewoman. The much-praised social satire "Südsee, eigene Insel" ("Our Island in the South Pacific", 1999) showed her as a mother spending a holiday with her family in the cellar of their house. Far darker was Oliver Hirschbiegel's thriller "Das Experiment" ("The Experiment", 2001) with Sawatzki as a research director, who becomes the victim of her own subjects of study. She then had smaller supporting roles in Marc Rothemund's "Harte Jungs" ("Ants in The Pants", 2000), Joseph Vilsmaier's "Leo und Claire" ("Leo & Claire", 2001) and Chris Kraus' "Scherbentanz" ("Shattered Glass", 2002), among others.

From 2002 Sawatzki was almost exclusively involved in television productions. This was probably due not least to her new commitment as a "Tatort" commissioner, the equally sensitive and determined Chief Inspector Charlotte Sänger . Together with her investigator colleague Jörg Schüttauf, she solved a total of 18 cases in the popular TV series by 2010. In 2005 she was awarded the Grimme Prize for her acting (for the episode "Herzversagen", together with Jörg Schüttauf, Stephan Falk and Thomas Freundner); in 2006 she received the Hessian Television Prize for her performance in the episode "Das letzte Rennen".

Also in 2006, Sawatzki won a German Comedy Award for her leading role in the twelve-part series "Arme Millionäre". Her performance in Volker Einrauch's highly acclaimed drama "Der andere Junge" ("The Other Boy", 2006) won her the actress award at the World Film Festival Montréal (Canada). In the film she played a bourgeois mother who wants to cover up a manslaughter commited by her young son. Other important TV roles of these years were the wicked stepmother in the fairy tale film "Brüderchen und Schwesterchen" (2008), a grieving mother in "Vom Atmen unter Wasser" (2008) and the wealthy aunt of an abducted child in the thriller "Entführt" (2009).

After her departure as "Tatort" commissioner in 2010, Sawatzki continued to mostly work for TV. In the highly acclaimed six-part series "Klimawechsel" ("Midlife Crisis", 2010), for example, she played a menopausal art teacher who tries to reconcile relationship, child and job. Also in 2010 she played the title role of housewife Isabella "Bella" Jung in the TV family comedy "Bella Vita", for which she was awarded the Bavarian Television Prize. Due to the success, five more "Bella" films were produced by 2014. In eight episodes of the international series "Borgia" (2011) she was seen as Adriana de Mila, the cousin of Pope Alexander VI.

At the Ludwigshafen Festival of German Film 2011, Sawatzki was awarded the Prize for the Art of Acting. On the big screen, she had a supporting role in the French-Belgian love and war drama "Je ne vous oublierai jamais" (2010) and played the mother of the male lead character in Doris Dörrie's drama "Glück" ("Bliss", 2012).

As a writer Andrea Sawatzki published several novels, three of which were adapted for the screen with her in the leading role: The family comedy "Tief durchatmen, die Familie kommt" ("Ho Ho Ho to You", 2015), as well as the two sequels "Von Erholung war nie die Rede" (2017) and "Ihr seid natürlich eingeladen" (2018). Since July 2015, she has also hosted the crime documentary series "Deadly Sins - Du sollst nicht töten".

From 2017 on Sawatzki appeared on the big screen more often again: In Nicolas Wackerbarth's award-winning "Casting" she embodied an idolised actress; in the children's film "Hilfe, ich hab meine Eltern geschrumpft" ("Help, I Shrunk My Parents", 2017) she played the ghost of an evil school director. Oskar Roehler cast her in a supporting role in his satire "HERRliche Zeiten" ("Subs", 2018).

In Martin Busker's feature film debut "Zoros Solo" (2019), she played the leader of a Christian boys' choir in Swabia, which is joined by a refugee boy from Afghanistan who wants to use the choir's upcoming concert in Hungary to see his father again. The film was released in cinemas in autumn 2019. Afterwards she again took on the role of the ghost of a school principal, this time in "Hilfe, ich hab meine Freunde geschrumpft" ("Help, I Shrunk My Friends").

On TV, she appeared as the mother of a Jewish family in the culture-clash comedy "Matze, Kebab & Sauerkraut" (2020) and in other sequels to the film series about the Bundschuh family: "Wir machen Abitur" (2019), "Familie Bundschuh im Weihnachtschaos" (2020), "Woanders ist es auch nicht ruhiger" (2021) and "Unter Verschluss" (2022). Directed by Doris Dörrie, she played a leading role in the social comedy "Freibad" ("The Pool", 2022), in which a public outdoor swimming pool functions as the microcosm of society with all its conflicts. The film opened in theaters in August 2022.

Andrea Sawatzki has been married to Christian Berkel since 2011 and lives with her family in Berlin.