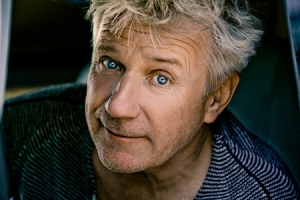 Jörg Schüttauf, born December 26, 1961, in Chemnitz (then Karl-Marx-Stadt), made his stage debut already at the age of six in the city's Pioniertheater and mainly performed in productions of fairy tales. He left school after the tenth grade and started training as a theatrical technician at the Chemnitz opera. After finishing military service, Schüttauf was accepted at Leipzig's theatre school where he stayed until his graduation in 1986. In 1984, while he was still studying, he played his first leading role in a movie, Ete, in Peter Kahane's realistic comedy "Ete und Ali". In 1986, Schüttauf won the Young actor"s award at the fourth national GDR feature film festival.

After graduating from drama school, Schüttauf became a cast member of Hans Otto Theater in Potsdam and stayed in Potsdam for five years. In 1989, he starred in "Die Architekten" ("The Architects"), one of the last DEFA films and at the same time a swansong for the GDR, again directed by Peter Kahane. After the end of the GDR, Schüttauf at first focused on his theatre career again but soon appeared more and more in TV productions. He starred in the leading role in Egon Günther's TV production "Lenz" about the poet Jakob Michael Reinhold Lenz who is slowly drifting into insanity. With this performance, Schüttauf made his breakthrough as an actor. He also won his first Grimme award – and three more Grimme awards until 2008.

From 1992 to 1996, Schüttauf was seen alongside Klaus Wennemann in 46 episodes of the TV crime series "Der Fahnder" in the role of Thomas Becker. Furthermore, he starred in several other TV series, including the crime series "Ein Fall für zwei", "Wolffs Revier", "Sperling", "Der Alte", as well as gangster Axel in Nico Hofmanns TV movie "Der große Abgang" (1995) and as Matt in Jo Baier highly-praised mini-series "Der Laden" ("The Store", 1998). During this time he also performed on stage, at theatres in Berlin and Magdeburg.

Jörg Schüttauf again collaborated with Egon Günther for the movie "Die Braut" ("The Mask of Desire") about Christiane Vulpius and Goethe, where he played four different servants. In 1997, Schüttauf won another Grimme award for his performance in Peter Welz's comedy "Viel Spaß mit meiner Frau" (1997). Furthermore, Schüttauf won the German TV award in 2000 for his part as a gangster in "Warten ist der Tod" ("Waiting Means Death"), directed by Hartmut Schoen, and for "Ich habe Nein gesagt" by Markus Imboden. In 2001, Schüttauf returned to the big screen in Hannes Stöhr's "Berlin is in Germany" as a prison inmate who was sentenced in the GDR and is released after the German reunification took place and who has to cope with this completely new world. The association of German film critics named him Best leading actor for this role. Schüttauf was also seen on the big screen in "September" (2003) and "Nachbarinnen" ("Wanted!", 2004).

From 2002 to 2010, Schüttauf starred as detective Fritz Dellwo alongside Andrea Sawatzki in the Frankfurt branch of the "Tatort" TV crime series. The episode "Herzversagen" won the Grimme award in 2005. And in 2007, Schüttauf won another Grimme award for the TV crime drama "Arnies Welt", directed by Isabel Kleefeld.

Also in the following years, Schüttauf starred in a great number of TV movies and series, his filmography including more than 100 productions. Among his most important TV works are roles in Udo Witte's caper crime movie "Die Blücherbande" (2009), in Peter Keglevic's military crime movie "Kongo" (2010), in the comedies "Stankowskis Millionen" (2011) and "BlitzBlank" (2013) as well as in the two-part crime movie "Tod eines Mädchens" (2015). Schüttauf could rarely be seen on the big screen during that time. He played an important supporting role as the bourgeois brother of an impostor (Devid Striesow) in the social drama "So glücklich war ich noch nie" ("I've Never Been Happier ", 2009); in Lars Kraume's award-winning "Der Staat gegen Fritz Bauer" ("The People vs. Fritz Bauer", 2015) he played a corrupt staff member of the Federal Criminal Police Office.

It was not before 2017 that he finally starred again in a lead role on the big screen. In the comedy "Vorwärts immer!" he portrays a GDR state actor, who in 1989 slips into the role of Erich Honecker to reverse a shoot-to-kill order and ends up in the house of Margot Honecker. For this role, Jörg Schüttauf was awarded with the Bayrischer Filmpreis 2017.