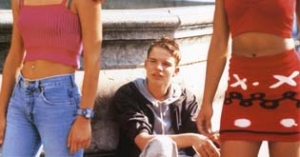 Ants in The Pants
This charming comedy begins with the teenager Florian, who wakes up one morning and makes the unmistakable acquaintance of him, that small difference that distinguishes him from the other sex and that has hardly been noticed ... until now!

Hiding quietly tucked in his trousers for these many years he has suddenly awakened to report shamelessly on the events in Flo′s life, making himself heard in the most impossible of situations. Florian stumbles into mischief with the help of his new friend, including matters of the heart with a certain pretty girl ...