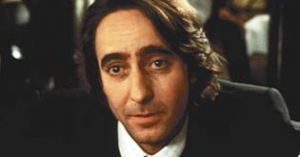 Dieter Landuris, born August 12, 1961, in Munich, started a two-year training for classical ballet in 1980. Subsequently, Landuris attended drama school at Munich’s Otto-Falckenberg-Schauspielschule and enrolled in American Studies and (for one semester) in Architecture at Munich’s Technische Universität. During this time Landuris already played small parts in the TV crime series "SOKO 5113". After graduating from drama school in 1985, Landuris became a cast member of the legendary Grips-Theater in Berlin. He starred in the leading role of the cult musical "Linie 1" ("Line 1") which became nationally as well as internationally. He also played an important supporting role in Reinhard Hauff’s adaptation of "Linie 1" for the cinema.

Besides smaller movie parts, Landuris played in numerous TV productions from the early 1990s on and was mainly seen in crime series such as "Wolffs Revier" ("Wolff"s Turf"), "Liebling Kreuzberg", and "Alles außer Mord", where he played commissar Uli fichte from 1994 to 1996. From the mid-1990s on, Landuris again focussed on his movie career and played humorous parts in films such as "Das merkwürdige Verhalten geschlechtsreifer Großstädter zur Paarungszeit" ("Love Scenes from Planet Earth"), and "Schnee in der Neujahrsnacht" ("Snow on New Year’s Eve") as well as obscure but still amiable demimonde characters such as a murder suspect "Die Mutter des Killers", a street-smart wanna-be spy in Hans-Christian Schmid"s "23", or a frustrated crook in Bernd Michael Lade’s "Null Uhr 12" ("12 Past Midnight").

Besides his work for movie and TV productions, Dieter Landuris is still a man of the theatre. In 1992, he played in a highly praised production of Goethe’s "Clavigo" at Munich’s Prinzregententheater. Just recently, Landuris was very successful with a stage adaptation of the film classic "Die drei von der Tankstelle" ("Three From the Filling Station") which premiered at Berlin’s Schlossparktheater in 2005. But in 2007, Dieter Landuris returns to the cinema alongside Benno Fürmann in Marc Rothemund"s "Pornorama", a comedy chronicle of Munich’s sex film industry in the 1970s.