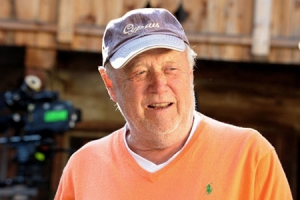 Joseph Vilsmaier, born January 24, 1939, in Munich, attended a Franciscan boarding school near Augsburg for five years and then went through an apprenticeship at Arnold & Richter (ARRI) in the department of camera techniques, in the film laboratory, and in film studio operations from 1953 to 1961. At the same time, Vilsmaier studied music with a major in piano at Munich’s academy of music and played in a jazz band.

Vilsmaier gained access to the film industry after an offer by Bavaria Film to work for the first time as the cinematographer – together with Gernot Roll – for the three-part TV movie "Wie eine Träne im Ozean". From 1972 on, he worked independently and became a freelance cinematographer in 1978. Besides numerous TV movies and TV series, Vilsmaier also filmed several feature films for the movie screen as well as commercials, image films, and documentary films. Some of his relatives then turned his attention to Anna Wimschneider’s novel "Herbstmilch" ("Autumn Milk"), the memories of a farmer’s wife from Rottal. Vilsmaier bought the movie rights and not only filmed the movie version of the same name but also directed his first feature film. His wife Dana Vávrová played the leading role. With nearly 2.5 million viewers, the film became a box office hit, while its director and actors won numerous film awards for their contributions.

His next film, the rubble drama "Rama dama" (Bavarian vernacular for "we do clean up"), became a quasi-sequel to "Herbstmilch" and again starred Dana Vávrovrá and Werner Stocker as lovers. But this time, Vilsmaier derived the film’s story from his own original idea.

With his film "Stalingrad", Vilsmaier once more dabbled at being a detailed chronicler of German lives and times. With a tremendous effort in material and in technology, Vilsmaier directed the "to date largest tank battle in film history" as the film distributor put it in its press campaign. The film opened in cinemas at the date of the 50th anniversary of the German defeat. The drama about the fate of the German soldiers in Stalingrad mobilized 1.3 million viewers.

Subsequently, Vilsmaier again took to movie versions of famous novels. After "Charlie & Louise – Das doppelte Lottchen", a modernized version of Erich Kästner’s children’s book classic, he made a movie version of Robert Schneider’s cumbersome best-selling novel "Schlafes Bruder" ("Brother of Sleep") about the musical boy wonder and outcast Elias. For the film, Vilsmaier build up a whole mountain village. This Cinemascope film that cost 17 million Marks won several awards and was nominated for the Golden Globe, but bombed at the box office, as did the more humble film version of Siegfried Sommer’s debut novel "Und keiner weint mir nach" ("And Nobody Weeps For Me") about six friends who live in an apartment building in Munich.

But his film "Comedian Harmonists" that again was situated during the time of the Weimar Republic drew 2.8 million viewers. Thus, it became Vilsmaier’s greatest triumph and turned out to be the most successful German film of the movie season 1988. Vilsmaier illustrated the rise and fall of the singing group in the form of a lavishly designed entertainment film.

Vilsmaier then received slating reviews for his film "Marlene" about the life of the German film star during several stages of her life between 1929 and 1945. With his film "Leo und Claire" ("Leo and Claire"), Vilsmaier again turned to a story situated in the time of Nazi Germany. He then finished the film version of Adalbert Stifter’s story "Bergkristall" ("Rock Crystal") that intertwined past and present in the setting of the winterly Alps mountains. In 2000, the Vilsmaiers published the children’s book "Der Bär ist los" ("Bear on the Run") and turned it into a movie version as a family project, directed by Vávrová, produced by Vilsmaier, and starring their daughter Janina Vilsmaier in the leading role.

Besides the TV comedy "Das Weihnachts-Ekel" (2006), Vilsmaier directed three movies during the following years that all dealt with different aspects of the Third Reich and World War II: "Leo und Claire" ("Leo and Claire", 2001) tells the true story of a Jew who is sentenced to death because of the racial policy of Nazi Germany. "Der letzte Zug" ("The Last Train", 2006) deals with the inhuman deportation of a group of Jews in the year 1943. "Der letzte Zug" won the Special Award at the 2007 Bavarian Film Awards. With the two-part TV movie "Die Gustloff" ("Ship of no Return", 2008), Vilsmaier tried to reconstruct the circumstances that lead to the tragic torpedoing of the German refugee ship "Wilhelm Gustloff" by the Soviet army in 1945.

With his more comedy-like film "Die Geschichte vom Brandner Kaspar", Vilsmaier brought one of the most famous Bavarian folk stories to the movie screen in 2008. His next project was the mountaineer drama "Nanga Parbat", that opened January 2010.

At Bayerischer Filmpreis 2010 Vilsmaier received an Honorary Award for his acievements as director, producer and cinematographer. The year before he had already received the honorary award at Deutscher Kamerapreis.

After directing the two-part TV thriller "Russisch Roulette" (2012), he helmed the TV adaptation of the play "Der Meineidbauer" (2012). Vilsmaier then paid homage to his native Bavaria with the scenic documentary "Bavaria - Traumreise durch Bayern" (2012).

Beginning of 2015, the documentary "Österreich: Oben und Unten" was released in cinemas in Austria. In the film, he shows mainly aerial shots of Austria, including special events such as a cattle drive, the Erzberg Rodeo and the Salzburg Festival.In addition to directing films, Vilsmaier is also active as a producer. With his production company Perathon, he for example functioned as associate producer of the Franco-Belgian-German feature film "Im Namen meiner Tochter - Der Fall Kalinka" ("Kalinka", 2016) and he co-produced Marie Noëlle's biopic "Marie Curie" ("Marie Curie: The Courage of Knowledge", 2016), another European co-production. In 2015, Vilsmaier directed another documentary about his Bavarian homeland: "Bayern sagenhaft" deals with the different customs in the seven administrative districts of the Free State. The film was released in German cinemas the fall of 2017.