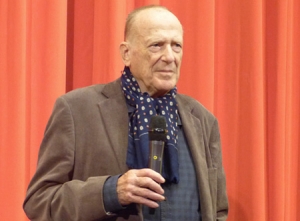 Wolfgang Kohlhaase at the Deutsches Filmmuseum, Frankfurt am Main, on October 9, 2014

Wolfgang Kohlhaase was born in Berlin on March 13th 1931. Following his school graduation, he started out as a journalist working for several East-German newspapers before moving on to the DEFA. From 1952 on, he worked as a freelance author and scriptwriter.

His breakthrough came with a series of neo-realist films directed by Gerhard Klein: Labelled "Berlin-Films", they dealt with the lives of young people growing up in the divided city. The other collaborations of Kohlhaase and Klein included the historical drama "Der Fall Gleiwitz" and "Berlin um die Ecke" – which due to state interference was completed in 1987, almost 20 years after production started.

In 1967, the anti-fascist war drama "Ich war neunzehn" marked the beginning of the long-lasting creative partnership between Kohlhaase and director Konrad Wolf. Till Wolf's death in 1982, they collaborated on films as diverse as "Der nackte Mann auf dem Sportplatz" and "Solo Sunny".

Kohlhaase, who's also been writing radio plays since the 1960's, adapted Hermann Kant's autobiographical novel "Der Aufenthalt" for a motion picture directed by Frank Beyer, who also helmed the Kohlhaase-scripted "Der Bruch" and with whom the author continued to work after the fall of the Berlin wall.

In the 1990s, Kohlhaase predominately worked for television, including high-profile projects like "Der Hauptmann von Köpenick". At the end of the decade, her returned to the screen with script for Volker Schlöndorff's acclaimed "Die Stille nach dem Schuss", which tells the story of a female Red Army Fraction terrorist hiding in the GDR.

One of Kohlhaase's successes in the 2000s was the script for Andreas Dresen's arthouse hit "Sommer vorm Balkon" ("Summer in Berlin"), which was celebrated by audiences and critics alike.