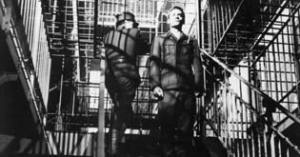 "Der Aufenthalt" is an intense, claustrophobic, heavily psychological prison drama set in the immediate aftermath of World War II. Based on an autobiographical novel by Hermann Kant, the film is about a young German infantryman who is transferred to a Polish jail after being mistaken for an SS war criminal and accused of the murder of a child. Harassed by his captors, despised by the Polish inmates, and shunned by his fellow German prisoners (mostly hard-line Nazis who recognize that he is not one of them), he begins to contemplate the nature and meaning of guilt, complicity and collective responsibility, and starts to think differently about his own innocence.