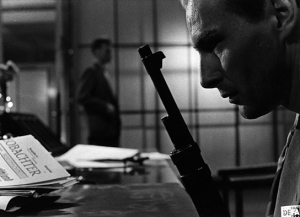 In the night of August 31 to September 1, 1939, the Nazis staged an assault on a German radio station in the Silesian town Gleiwitz, near the Polish border in order to justify the invasion of Poland to the public throughout the world. SS head storm leader Naujoks was in charge of the operation. Polish-speaking ethnic Germans from an SS fencing academy acted as the Polish attackers, and a German concentration camp prisoner, clad in a Polish uniform, was left shot at the radio station.