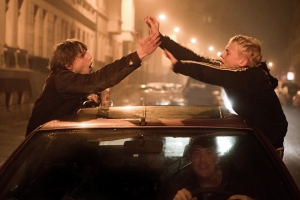 As We Were Dreaming

The Leipzig suburbs, shortly after the collapse of East Germany. Rico, Daniel, Paul and Mark, until recently still Pioneers in their red neckerchiefs, are growing up in the maelstrom of the newly reunited country. Yesterday's rules no longer count today. They turn night into day and the streets into an adventure playground. The boys run wild and hang out in the neighbourhood, steal cars, experiment with drugs and try out the new swingers' club. They open their own disco which is soon besieged by neo-Nazi skinheads. Everything is in a state of flux and decay, everyone is overflowing with dreams: Rico longs for a boxing career; Daniel yearns to have a grand love affair with Little Star, the most beautiful girl Leipzig has ever known ...

Screenwriter Wolfgang Kohlhaase and director Andreas Dresen have condensed the 2006 multi-award-winning debut novel from Leipzig author Clemens Meyer into a cinematic parable about friendship and betrayal, hope and illusion, brutality and tenderness. They tell the story of a lost youth and at the same time present a tale of rebellion and the perpetual Utopian dream of great happiness.