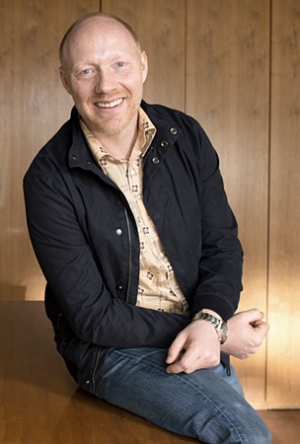 Simon Schwarz was born in Vienna on January 10, 1971 to a theater scholar and a Germanist. He received his acting training at the Anne Woolliams School in Zurich and (as a guest student) at the Hochschule Ernst Busch in Berlin; at the same time, he trained in dance and ballet. Afterwards, Schwarz worked as a stage actor, working at the jolie théâtre in Basel, the Stadttheater Klagenfurt and the Stadttheater Luzern.

Schwarz made his television debut in 1996 with a guest role in the TV series "Spiel des Lebens", the same year he made his debut on the big screen: in Stefan Ruzowitzky's over-the-top "Tempo" he played the main character's roommate, and he also appeared in Ruzowitzky's next film, the drama "Die Siebtelbauern" ("The Inheritors"): Alongside Sophie Rois and Lars Rudolph, he played the simple-minded farmhand Lukas, who inherits the late farmer's farm with seven other maids and farmhands, resulting in conflicts with the village community. Schwarz received the Max Ophüls Award for best young actor for his performance.

After this breakout role, he appeared in numerous German and Austrian film productions, including Wolfgang Murnberger's successful black comedy "Komm, süßer Tod" ("Come Sweet Death", 2000), based on the crime novel by Wolf Haas. In this and three other films based on his "Brenner" novels (most recently "Der Knochenmann"/ "The Bone Man", 2009), Simon Schwarz portrayed Berti, an emergency doctor's assistant and ambulance driver who, together with ex-policeman Brenner (Josef Hader), uncovers criminal machinations. From 2000 to 2008, Schwarz appeared in the TV crime series "Trautmann" as the quick-tempered Viennese investigator "Burschi" alongside the title character.

Other important films of these years include "Storno" by Elke Weber-Moore and "Adam and Eva" by Paul Harather, in which Schwarz played the male title role. In Jörg Kalt's feature film debut "Crash Test Dummies," which screened at the Berlinale Forum in 2005, Schwarz was convincing in the role of the lovesick department store detective Jan. Between 2006 and 2009, Schwarz also starred in box office successes such as the comedy "Schwere Jungs" ("Heavyweights") and Philipp Stölzl's drama about the first ascent attempt of the Eiger North Face in 1936 ("Nordwand"/ "North Face").

Since 2013's "Dampfnudelblues," Simon Schwarz has revisited the role of the headstrong co-investigator Rudi Birkenberger alongside police chief Franz Eberhofer (Sebastian Bezzel) in the successful film adaptations of Rita Falk's Bavarian provincial crime novels, among them the "Kaiserschmarrndrama," which attracted more than 1.1 million moviegoers to theaters in the pandemic year 2021.

In the ARD series "Die Eifelpraxis," which has been on the air since 2015, Schwarz can be seen as wheelchair-using chief physician Dr. Chris Wegner.
Although known more for quirky, sympathetic and whimsical characters, Schwarz also appears just as convincingly in serious roles. In Peter Payer's thriller "Am Ende des Tages" ("What a Difference a Day Makes", 2011), he played a career-fixated politician with a dark secret, and in the multiple award-winning drama "Alles wird gut" ("Everything will be okay", 2014), he played a single father who kidnaps his daughter out of desperation. Patrick Vollrath's film won, among others, the Student Academy Award in Bronze for Best Foreign Language Film, the First Steps Award and the Max Ophüls Award for Best Medium-Length Film, and Schwarz received acting awards at the Nice and Valencia film festivals. He made further appearances in Mark Monheim's award-winning comedy "About A Girl" (2014) and in Valentin Hitz's dystopian drama "Stille Reserven" ("Hidden Reserves", 2016), among others.

In the Austrian feature film "Zerschlag mein Herz," ("Crush My Heart") directed by his life partner Alexandra Makarová, Schwarz worked as a producer for the first time in 2018 and won (together with Konstantin Seitz) the Austrian film award Romy.

In 2021, Schwarz took on the role of the Devil in the production of "Jedermann" at the Salzburg Festival.