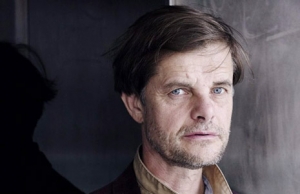 Lars Rudolph was born in Wittmund on August 18 1966. Starting out as a musician while still in high school, he became a founding member of the noise rock band KIXX, which later also featured Wigald Boning and Jim Meneses and performed internationally. After graduating, Rudolph began to study music at Oldenburg University. He remained a member of KIXX until 1994, while also performing in other band projects. During that time, he attended several acting courses and soon was cast in movie and theatre roles.

Lars Rudolph had his breakthrough following his performances in "Edgar" (1996) and "Not a Love Song" (1996), which won him the Max-Ophüls-Preis for Best Newcomer. Over the course of the next years, he had memorable roles in films like Stefan Ruzowitzky's "Die Siebtelbauern" ("The Inheritors", AT/DE 1998) and Michael Hofmann's "Der Strand von Trouville" ("Trouville Beach", 1998). His parts in Jan Schütte's "Fette Welt" ("Fat World", 1998) and Tom Tykwer's "Der Krieger und die Kaiserin" ("The Princess and the Warrior", 2000), both garnered him Best Supporting Actor nominations at the German Film Awards. Moreover, world-renowned filmmaker Béla Tarr cast him as the lead in "Die Werckmeisterschen Harmonien" (2000).

Also a busy TV actor, he guest-starred on series like "Tatort" and "Ein Fall für zwei" and appeared in the two-part fantasy film "Baron Münchhausen" (2012). In addition to his acting career, Rudolph regularly performs with his punk jazz band Mariahilf, which was founded in 2009.

In addition to his screen work, Rudolph also maintained a prolific stage career and appeared in productions at the Schauspielhaus Zürich, the Hebbel-Theater and the Berliner Volksbühne.