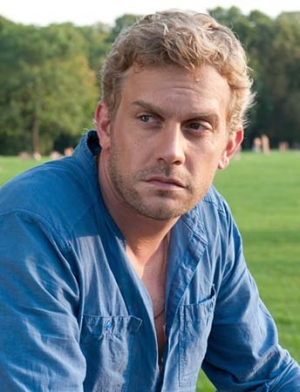 Sebastian Bezzel, born 1971 in Garmisch Partenkirchen, graduated from drama school at Munich's Bayerische Theaterakademie. He subsequently performed at theatres such as Munich Residenztheater, the Prinzregententheater, and was a cast member of Bayerisches Staatsschauspiel. In 1996, Bezzel made his movie debut in "Strong Shit", Till Schauder's drama about a bank robbery. Since 2000, Bezzel is regularly seen in films and TV movies, at first mainly in romantic comedies for TV such as Marco Serafini's "Du oder Keine" and in TV series like "München 7" or "Bloch".

Since 2003, Sebastian Bezzel plays the leading role of inspector Kai Perlmann in the SWR "Tatort" crime series films. His portray of a police sergeant in the RTL crime series "Abschnitt 40" won Bezzel a nomination for the German TV award. In 2007, Bezzel returned to the movie screen in a leading role in the winter sports comedy "Schwere Jungs" ("Heavyweights"), followed by a part in Maggie Peren's ensemble comedy "Stellungswechsel"("Special Escort").

With the leading role in "Vatertage – Opa über Nacht" (2012), Bezzel appeared on the big screen again, playing an airily lady-killer, who is taken aback, when some day his daughter stands before him – already with her own baby.

After featuring in a guest role as a charming lecturer in "Heute bin ich blond" ("The Girl With Nine Wigs", DE/BE 2013), he starred as smart country cop Franz Eberhofer in the Bavarian crime caper "Dampfnudelblues" (2013) based on the Rita Falk novel. The black-humored comedy "Die Gruberin" (2013, TV) had him play an officer of a different kind, incompetent and sappy. Television held several important roles in store for Bezzel, for example in the romantic drama "Der Geruch von Erde" (2014) where he played the protagonist's first love, and in the romantic comedy "Immer wieder anders" (2014) in which he took the role of a future husband of a woman who is still wooed by her ex.

For the movie "Winterkartoffelknödel" (2014) Bezzel again slipped into the role of likable village police sergeant Eberhofer. He had a mainrole as König Wilbur in Uwe Janson's "Sechse kommen durch die ganze Welt" (2014, TV) and then joined Hans Sigl and Heiko Pinkowski as part of the cast for the TV comedy "Einer für alle, alles im Eimer" (2015) as a resident of a bizarre shared apartment for guys only. In addition, he starred in his continuing "Tatort" role as police lieutenant Kai Perlmann.

In 2016, Bezzel returned to the big screen in the third adaptation of an "Eberhofer" crime novel: In "Schweinskopf al dente" he once again played country cop Franz Eberhofer, his signature role. The next film of the series, "Grießnockerlaffäre" ("The Dumpling Affair"), had its cinematic release in 2017. In August 2018 the fifth installment called "Sauerkrautkoma" followed. In the same month Bezzel played a single father as part of the large ensemble of the dating comedy "Safari - Match Me If You Can".

For TV he starred as the son of a famous women's rights activist in the comedy "Einmal Sohn, immer Sohn" (2018). In autumn 2018, the made for TV comedy "Echte Bauern singen besser" celebrated its premiere at the Filmfest Hamburg, with Bezzel in a double role: as a good-natured farmer who is supposed to act as a double for a reckless rock star.

In 2019 Bezzel performed in a guest role as a "hard-boiled cop" in six episodes of the daily soap "Akte Lansing". In the summer of the same year, "Leberkäsjunkie", the sixth "Eberhofer" crime thriller, opened in cinemas.