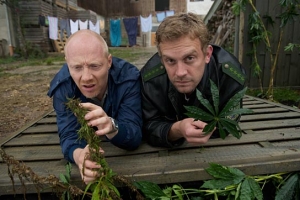 Simon Schwarz, Sebastian Bezzel (from left to right) in "Dampfnudelblues" (2012/13)

Things are not exactly running smoothly in the life of police chief Franz Eberhofer. He lives in Niederkaltenkirchen in Lower Bavaria with his grandmother who is hard of hearing, his girlfriend Susi makes eyes at someone else, his brother lets him constantly look after his child, and to make matters worse, his father grows cannabis. The daily routine at work demands little from him. Suddenly the body of the universally unpopular school director Höpfl is found on the railway tracks, on whose house wall "Die you pig" had been sprayed. In contrast to his superior, Eberhofer does not believe in suicide and sets off on a search for clues with his Munich ex-colleague Rudi Birkenberger.