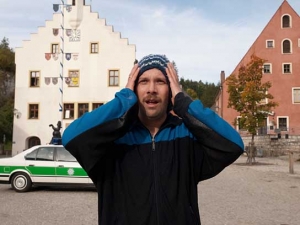 Don't You Believe It!

Back in the days, the little village tucked away in the mountains used to be a favourite destination for skiers. However, there has been no snow in the last couple of winters – and thus no tourists either. The life of innkeeper Georg and his wife Emilie has been stagnating for some time, too, on both the professional and the romantic level. It is not until the passing of Emilie's devout and tedious mother Daisy that Georg finally releases some unimagined creative energy.

In a sudden flash of inspiration he comes up with the idea to have Daisy canonized in order to attract tourists once again. By this means, he wants to turn the village from a skier's Mecca to a place of pilgrimage for pious Catholics. The souvenir and memorabilia business would surely be not so bad after all. And, indeed, the pope sends a clergyman to the mountains to get a firsthand impression of the good deeds of Saint Daisy. Georg, his friends and Emilie's sister Evi use all sorts of ludicrous maneuvres to convince the examiner.