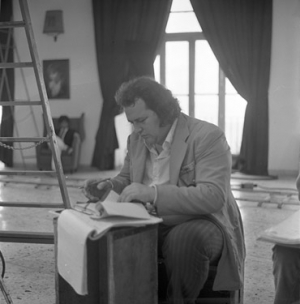 Peter Berling was born on 20 March 1934 in Meseritz-Obrawalde (today Międzyrzecz, Poland) and grew up in the Neumark, Berlin and then mainly in Osnabrück. His creative and artistic talent was already apparent during his school days at the Birklehof boarding school in Hinterzarten. According to his own statements, however, he was regarded as "unsteady and easily distractible". His grammar school career ended prematurely and, according to himself, "ingloriously". He completed an apprenticeship as a bricklayer and then began studying at the Oskar-von-Miller-Polytechnikum in Munich, where he dropped out of after only one semester. Instead he moved to the Munich Academy of Fine Arts, where he studied in the class for applied graphics under Prof. Julius E. Schmid. During this time Berling designed company logos and advertising brochures, nightclubs and jazz clubs.

At the end of the 1950s Berling had his first small jobs in film, for example as a sound assistant (without being credited) for Richard Fleischer's "The Vikings" ("Die Wikinger", US/DE 1958). Through his acquaintance with Alexander Kluge he finally found his way into the film business at the beginning of the 1960s, first as a producer and scriptwriter for early short films of among others Kluge, Günter Lemmer, Niklaus Schilling and Ulrich Schamoni. His first feature-length production was Klaus Lemke's "Negresco **** - Eine tödliche Affäre" (1968), the following year he produced Werner Schroeter's "Nicaragua". As production manager Berling was involved in the Fassbinder films "Liebe ist kälter als der Tod" ("Love Is Colder Than Death", 1969), "Whity" (1971) and "Warnung vor einer heiligen Nutte" ("Beware of a Holy Whore", 1971), in which he also played small roles.  At this time, he also had smaller appearances in Rudolf Thome's "Detektive" (1969) and "Rote Sonne" ("Red Sun", 1970).

Berling increasingly focused on acting from the beginning of the 1970s. In the altogether almost 60 years of his career he appeared in more than 80 cinema and television productions. He worked with some of the most renowned filmmakers of German and European auteur cinema. Werner Herzog cast him as a Spanish mercenary in "Aguirre, der Zorn Gottes" ("Aguirre, the Wrath of God", 1972) and as opera manager in "Fitzcarraldo" (1982); later he belonged to the ensemble of "Cobra Verde" (1987).

Berling, who had lived in Rome since 1969, also occasionally wrote screenplays. For example, on the Italian thrillers "I padroni della città" ("Rulers of the City", IT/DE 1976) and "Pronto ad uccidere" ("Risking", IT 1976); he was also one of the authors of the controversial film "Spielen wir Liebe" ("Playing with Love", 1977) about the sexual awakening of three teenagers between the ages of 12 and 14. But his main field of activity remained acting. He had a prominent role as a crook in "Theo gegen den Rest der Welt" ("Theo Against the Rest of the World", 1980) and in smaller supporting roles belonged to the ensembles of the Fassbinder films "Die Ehe der Maria Braun" ("The Marriage of Maria Braun", 1979) and "Die Sehnsucht der Veronika Voss" ("Veronika Voss", 1982).

He was a high-ranking clergyman in Jean-Jacques Annauds "Der Name der Rose" ("The Name of the Rose", 1986) and played a member of the high society in Munich in the first episode of Helmut Dietl's "Kir Royal" (1987, TV). Berling's other film appearances include Liliana Cavani's "Francesco" (IT/DE 1989, as a bishop), Volker Schlöndorff's "Homo Faber" ("Voyager", 1991, as Baptist) as well as the Helge Schneider films "Texas - Doc Snyder hält die Welt in Atem" (1993, as Snyder's brother) and "Praxis Dr. Hasenbein" (1997, as Hasenbein's son Peterchen). Berling also had small roles in Martin Scorsese's "The Last Temptation of Christ" (CA/US 1988) and in "Gangs of New York" (US/IT 2002) - one of his last screen roles.

Berling appeared on television until late in his life, making regular appearances in the shows "10 vor 11" and "Prime-Time/Spätausgabe", in which he slipped into various roles and costumes and was interviewed by Alexander Kluge. Since the beginning of the 1990s he had been active as an author of novels set in the Middle Ages; his cycle of novels "Die Kinder des Gral" (1991-1997), which was characterized by detailed factual knowledge, was a great success. About Fassbinder he published the book "Die 13 Jahre des Rainer Werner Fassbinder" in 1992. An autobiographical novel entitled "Hazard & Lieblos" was published in 2011. His last role was a guest appearance in Christian Alvart's comedy "Halbe Brüder" in 2015.