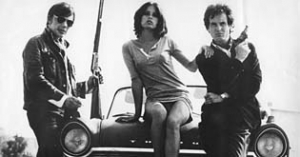 Andy and Sebastian want to make a lot of money in a quick and easy way. Inspired by the movies, they become private investigators. Their first case happens to be about a beautiful girl called Annabella. But being a private investigator is a more demanding job then Andy and Sebastian had initially thought. Their female acquaintances Annabella, Christa, and Micky also have their share in Andy′s and Sebastian′s problems. The two wannabe detectives become more and more entangled in things that prove too be too much for them. In the end, they only pretend to be investigators – but maybe that is exactly the reason why they survive the film′s ending unharmed by gun shots. "The important thing about this adventure is not so much the story itself as it is only a means that leads to surprising ways of seeing things", said film critic Hans Schober about Thome′s film.