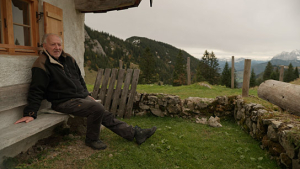 Werner Stipetic was born September 5, 1942, in Munich. At first, he grew up on a remote farm in Upper Bavaria but moved with his mother to Munich after his parents divorced. He hitchhiked through Yugoslavia and Greece in 1956, worked in Manchester for a couple of months at the age of 17, and finished school in 1961. In 1962, Herzog finished his first short film "Herakles" and set up his own production company in 1963. Herzog then studied history, literature and theatre studies in Munich, later as a Fulbright scholar at the film institute of Pittsburgh's Duquesne University.

In 1966, Herzog finished "Die beispiellose Verteidigung der Festung Deutschkreutz" ("The Unprecedented Defence of the Fortress Deutschkreuz"), a "study" for his first feature-length film "Lebenszeichen" ("Signs of Life", 1967) that won the German film award in 1968 and was named the best debut film at the international film festival in Berlin. Furthermore, Herzog won the first prize at the 1968 Kurzfilmtage Oberhausen for his short film "Letzte Worte" ("Last Words").

Between 1968 and 1970, during several stays in the Sahara desert and on Lanzarote, Herzog finished "Fata Morgana". With "Aguirre, der Zorn Gottes" ("Aguirre, the Wrath of God"), that was filmed in Peru in 1972, Herzog managed in his first collaboration with Klaus Kinski to attract a larger audience by casting an international star for the leading role.

In choosing his locations Herzog repeatedly put himself – and sometimes even his staff members – at extreme risks. He was also criticized for casting roles with "exotic" lay actors: "Auch Zwerge haben klein angefangen" ("Even Dwarfs Started Small", 1970) is a controversial parable of deformed social behaviour, with only actors with dwarfism. Furthermore, in "Jeder für sich und Gott gegen alle" ("The Enigma of Kaspar Hauser: Every Man for Himself and God Against All", 1974) Bruno S., who had been living in isolation for several years, played the leading role of Kaspar Hauser.

For "Herz aus Glas" ("Heart of Glass", 1976), Herzog thought it useful to hypnotize the actors as a "means of stylization". Bruno S. also played the title role in "Stroszek" (1976/77), a film that borrowed several motives from the biography of its leading actor. In 1978, Herzog finished his first genre film with "Nosferatu – Phantom der Nacht" ("Nosferatu, the Vampyre"), a remake of Murnau's classic film "Nosferatu. eine Symphonie des Grauens" ("Nosferatu. A Symphony of Horror", 1921), as well as his first film adaptation, Büchner's "Woyzeck". In 1979, Herzog started to prepare the shooting of "Fitzcarraldo" in Peru. After several recasts, Klaus Kinski took the leading role. But during the shooting of the film, several arguments arose, also with the indigenous people in the area where the crew filmed.

Herzog then finished the socially critical film "Wo die grünen Ameisen träumen" ("Where the Green Ants Dream"), "Ballade Vom Kleinen Soldaten" ("Ballad of the Little Soldier"), and "Gasherbrum – Der leuchtende Berg" ("The Dark Glow of the Mountains") about Reinhold Messner in the Pakistani Karakoram massif. "Cobra Verde" ("Slave Coast") was his last collaboration with Klaus Kinski. In 1999, Herzog made the documentary film "Mein liebster Feind" ("My Best Fiend - Klaus Kinski") about his relationship with Kinski.

After "Schrei aus Stein" ("Scream of Stone", 1991), Herzog only made documentary films during the 1990s and did not return to feature films until he finished "Invincible" in 2001. One central motive of his following films are the conflicting poles of man and nature, of science and spiritualism. In "Rad der Zeit" ("Wheel of Time"), for instance, Herzog observed a Buddhist ritual; for the documentary film "The White Diamond" Herzog accompanied an aviation engineer in a miniature zeppelin to the rain forest in Guyana; the pseudo documentary film "The Wild Blue Yonder" tells the story of an extraterrestial on earth. In his feature film "Rescue Dawn", Herzog shows the struggle of survival of an US Air Force pilot (Christian Bale) who has been downed. In "Encounters at the End of the World", Herzog takes on a trip to the Antarctic to eternalise the beauty of the local landscapes on film.

Werner Herzog's next project was a rather unfaithful remake of Abel Ferarra's 1993 cult classic "Bad Lieutenant", entitled "The Bad Lieutenant: Port of Call – New Orleans" (USA 2009) with Nicolas Cage, Val Kilmer and Eva Mendes in the leading roles. In the same year Herzog made "My Son, My Son, What Have Ye Done" (USA), a drama based on a true story, with Michael Shannon as a man who kills his mother without any apparent reason.

"Cave of Forgotten Dreams" is Herzog's first work filmed in 3D – a documentary, which takes the spectator on a journey into the cave of Chauvet in southern France, where the earliest known cave paintings can be found. His following film "Into the Abyss" questions the system of death penalty by depicting the fate of a Death Row inmate and received an award for the Best Documentary at the London Film Festival 2011. Death and guilt were also topical in Herzog's 2013 short documentary "From One Second to the Next". The same year, he received honorary awards at the German Film Awards and the Locarno IFF.

Since the beginning of the 1970s, Herzog has every now and then played roles in movies of other directors, mostly minor ones. He appeared for example in Peter Fleischmann's "Es ist nicht leicht ein Gott zu sein" ("Hard To Be a God" 1989), Harmony Korine's "Julien Donkey-Boy" (1999) and alongside Woody Harrelson in the improvised comedy "The Grand" (2007). The thriller "Jack Reacher" (2013) saw Herzog starring as the villainous antagonist of Tom Cruise. His characteristic voice and memorable German accent also have him in high demand as a voice talent, as exemplified in the Japanese animation feature "Kaze tachinu" (2014) and the box office hit "Penguins of Madagascar" (2014).

"Queen of the Desert", Herzog's first fiction feature in six years, premiered in the competition of the 2015 Berlin IFF. The following year, the now 74 year old filmmaker presented three new works: the documentaries "Lo and Behold, Reveries of the Connected World" (US 2016) and "Into the Inferno" (UK/US/DE 2016), as well as the drama "Salt and Fire" (DE/US/FR/MX 2016), the latter starring Veronica Ferres.

Herzog is self-publishing his screenplays as "film narratives" in the Skellig Edition, named after Skellig Rock, an island west of Ireland on which "Herz aus Glas" was filmed.

At the Bavarian Film Awards 2017, Werner Herzog received the Honorary Award for his lifetime achievement. At the DOK Leipzig 2018 festival, his documentary "Meeting Gorbachev" (GB/US/DE) premiered. Subsequently, the tireless director shot the feature film "Family Romance, LLC." (2019) and the documentary "Nomad: In the Footsteps of Bruce Chatwin" (GB 2019).

At the 2019 European Film Awards, Herzog was again honored with a Lifetime Achievement Award. The following year, he presented the documentary "Fireball: Visitors from Darker Worlds" (GB/DE 2020) at the Toronto International Film Festival. In 2021 he published his third literary work: In "Das Dämmern der Welt" ("The Twilight World") he devoted himself to the true story of the Japanese soldier Onoda, who decades after the end of the Second World War held out on a Pacific island in the jungle and continued to fight, believing the news of Japan's defeat to be a fake.

The following year, on the occasion of Herzog's 80th birthday, he published his memoirs. Nevertheless, they did not mark the end of his creative period in film, as another Herzog film premiered in June, the volcanologist documentary "The Fire Within: A Requiem for Katia and Maurice Krafft."