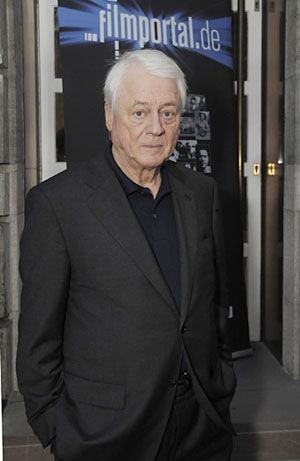 Alexander Kluge at the Deutsches Filmuseum in Frankfurt on September 10, 2009

Alexander Kluge, who as a writer has not only created innovative films and TV formats but also important literary texts and theoretical essays, was born 1932 as the son of a physician in Halberstadt. After finishing school in Halberstadt and in Berlin, he began his intellectual career and studied law, history, and church music in Marburg and in Frankfurt am Main where he attended lectures by Theodor W. Adorno, among others. At the age of 24, he obtained his PhD with his doctoral dissertation "Die Universitätsselbstverwaltung".

In 1958, he became an assessor and started to work as a lawyer in Berlin and in Munich. At the same time, he also started his career as a writer and artist and devoted himself to film. Kluge made his first experiences with the film business under legendary filmmaker Fritz Lang who had returned from exile. Kluge was a trainee at Artur Brauner's production company CCC when Lang directed "Das indische Grabmal" ("The Indian Tomb") for CCC. In 1960, Kluge finished his first short film in Munich together with Peter Schamoni. "Brutalität in Stein" ("Brutality in Stone") dealt with the topic of Nazi architecture (the footage later appeared in an episode of "Die Zweite Heimat" - "Heimat II" by Edgar Reitz).

In 1962, Kluge was one of the filmmakers who signed the "Oberhausen Manifest" that announced the claim to create the "New German Film". In the same year, Kluge, Edgar Reitz, and Detten Schleiermacher took over the direction of the film department of Ulm's Hochschule für Gestaltung. Furthermore, Kluge set up his own production company Kairos-Film that exists until today. In addition, he was one of the founding members of Kuratorium Junger Deutscher Film and was involved in the legal regulation of film subsidy, a topic that he had already dealt with as a lawyer.

But it took several years until the theoretically postulated removal of the "old" cinema had been put into action. Again, it was Kluge who made the internationally appreciated breakthrough for "New German Cinema" with his programmatically titled feature-length film debut "Abschied von gestern" ("Yesterday Girl", 1966). In several other essay films like "Die Artisten in der Zirkuskuppel: ratlos" ("The Artists Under The Big Top: Perplexed", 1968) or "Gelegenheitsarbeit einer Sklavin" ("Part-Time Work of a Domestic Slave", 1973), Kluge further developed his associative-analytical style. He portrayed his father in the short film "Ein Arzt aus Halberstadt" (1970) who as a so called "opera doctor" went to theatre performances every night in case of emergencies. The opera as "generator of feelings" is a recurring theme in Kluge's works.

Together with Edgar Reitz, Kluge finished "In Gefahr und größter Not bringt der Mittelweg den Tod" ("In Danger and Dire Distress the Middle of the Road Leads to Death", 1974) and participated in several political collective film projects: "Deutschland im Herbst" ("Germany in Autumn", 1978), "Der Kandidat" ("The Candidate", 1980), and "Krieg und Frieden" ("War and Peace", 1983). Although the form of his films did not produce any star actors as such, Hannelore Hoger still came close to this status. Furthermore, Kluge's sister Alexandra repeatedly appeared as an actress in his films.

Kluge was always concerned with film and culture politics. His first publication was the essay "Kulturpolitik und Ausgabenkontrolle" (1960). From 1964 on, he also published novels like "Schlachtbeschreibung", stories, and essays. Kluge has won several important awards for his work as a writer: the Fontane award (1979), the Kleist award (1985), the Lessing award (1990), the Heinrich Böll award (1993), the Ricarda Huch award (1996), the Schiller award (2001), or the Georg Büchner award (2003).

In 1973, Kluge was appointed honorary professor at Johann Wolfgang von Goethe Universität in Frankfurt am Main and started his collaboration with the sociologist Oskar Negt. Together they published "Öffentlichkeit und Erfahrung" (1973), "Geschichte und Eigensinn" (1981), "Maßverhältnisse des Politischen" (1992), and "Der unterschätzte Mensch" (2001), among other works. Furthermore, he formulated his deliberations on film and media theory in "Bestandsaufnahme - Utopie Film" (1983) and other publications. Kluge's thinking is influenced by Walter Benjamin, by the Frankfurt school, and by Habermas – the term "public" is most important for him.

When commercial television became more and more popular in 1980s Germany, Kluge made use of a law that obligated the TV channels to supply time slots for independent cultural magazines. To carry out his idea of "publisher television", he set up the production company dctp (Development Company for Television Programs) in 1988. The SPIEGEL publishing house and others participated in this company. Initially, dctp made broadcasts on RTL and SAT 1, and from 1993 on, also on the new TV channel VOX. dctp even had shares in the station and temporarily took over the direction during a crisis of the TV channel in 1994.

Kluge's TV formats included the cultural magazines "Prime Time/Spätausgabe", "10 vor 11/Ten to Eleven", and "News & Stories". He broadcasted unusual documentary insights and historic side glances on a weekly basis. Thus, for him it came true what he had made his leading character from "Die Artisten...", Leni Peickert, say in 1968: "Someday, everything grows together – the love for your cause, the novels, and TV technology."

On the occasion of Alexander Kluge's 75th birthday, a DVD edition with all 57 of his theatrically released films (short films and feature films, supplemented by selected television works and texts) was released in 2007, published by the Goethe-Institut, the Filmmuseum München and the Kulturstiftung des Bundes. In the same year, Kluge was awarded the Great Cross of Merit of the Federal Republic of Germany. The year after that, he received the German Film Prize for his "outstanding services to German film". Other accolades he received include the Theodor W. Adorno Prize (2009), and the Grimme Prize (2010) in recognition of his services to the development of television.

Despite such honours for his achievements, Kluge has not yet retired. He shot documentaries such as "Der Deutschlandkomplex" (2009, together with Stefan Aust) and "Mensch 2.0 - Die Evolution in unserer Hand" (DE/CH 2012, together with Basil Gelpke) and published numerous books. He also had several exhibitions dedicated to him, among others at the Cinémathèque française in Paris (2013) and at the Deutsche Kinemathek in Berlin (2014).

In 2017, Kluge was awarded the Jean Paul Prize for his literary lifetime achievement. Also in 2017, he realized "Alexander Kluge. Pluriversum", an exhibition that was on show at the Folkwang Museum in Essen. At the Venice Film Festival 2018, Kluge presented a new work, the experimental film essay "Happy Lamento". The German theatrical release took place in June 2019.