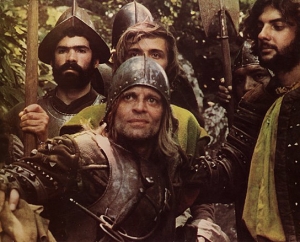 Aguirre, The Wrath of God
Peru 1560. Spanish Conquistadores take off in search of the legendary El Dorado, the land of gold. A small group of soldiers led by the nobleman Ursúa is sent ahead. Ursúa decides to return to the main camp after losing many men in a journey down the river fraught with danger. However, the non-commissioned officer Lope de Aguirre, who calls himself "God′s Vengeance" and "The Great Traitor", incites the men to mutiny. He declares that the Spanish king has been deposed and appoints the Don Fernando de Guzman as "Emperor of El Dorado". Obsessed by the idea of becoming a second Cortez, Aguirre continues his journey downstream in search of El Dorado, accompanied by his small band of armed men.

The expedition is constantly watched and threatened from the banks of the river, although the hostile Indians never actually show themselves. Their food supplies run low and only Guzman insists on eating like an Emperor. He is murdered by the men when he orders that the horse on the raft be thrown into the river. Decimated by the Indians′ poison arrows, the band of exhausted, feverish men suffer from hallucinations. Aguirre is the only one constantly to proclaim his vision of a new world empire. He is ultimately the sole survivor. Surrounded by corpses, he stands on the raft as it drifts in circles, dreaming of the immense wealth, power and fame, as well as of the dynasty that he will found with his daughter.