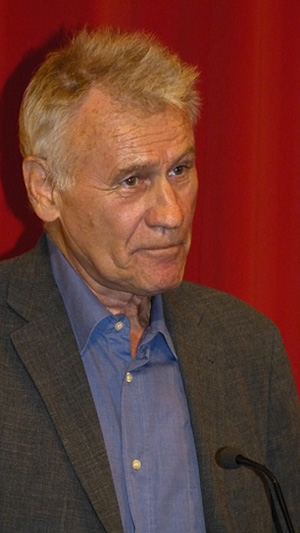 Rudolf Thome in the Deutsches Filmmuseum, Frankfurt am Main, September 21, 2014

Rudolf Thome, born on 14 November 1939 in Wallau (today: Biedenkopf) as the son of a bookseller, began studying German language and literature and history in 1960, first in Munich and later in Bonn. While still a student, Thome began writing his first film reviews for the Bonner Generalanzeiger in 1962. In the same year he returned to Munich, where he worked as a film critic for the Süddeutsche Zeitung until 1968. He also published texts in the magazine Film (1963/64) and later wrote for the groundbreaking film magazine Filmkritik. In 1964 Thome co-directed with Eckhart Schmidt "Die Versöhnung", an 8mm short film, which he shot again, this time directing it alone, on 16mm a little later. In 1965 Thome founded the production company Alexandra-Film together with Klaus Lemke and Max Zihlmann.

In the following years Thome realised further short films and was involved as production manager in short films by his friends and colleagues Lemke and Zihlmann. In 1968 Thome made his feature film debut with "Detektive"; followed one year later by "Rote Sonne" ("Red Sun") starring Marquard Bohm and Uschi Obermaier. "Rote Sonne", like "Detektive", became a key work of the Munich filmmaking scene of the late 1960s.

The film lover and former film critic Thome repeatedly cited Howard Hawks as a role model - above all because of his strong and complex female characters and his straightforward, 'simple' narrative style.

With the television film "Supergirl" (a free adaptation of the DC comic) and the big city drama "Fremde Stadt" ("Strange City") Thome concluded his 'Schwabinger Phase': In 1973 he moved to West Berlin with his then wife, filmmaker Karin Thome. In addition to his work as a director, he wrote film reviews for the Tagesspiegel and the city magazine Hobo. Thome was also a member of the Arsenal Kino team and of the International Forum of Young Film at the Berlinale. His next films, "Made in Germany und USA" (1974) and "Tagebuch" ("Diary", 1975) also premiered at the Forum of the Berlinale. What is special about all three of these films is that they were shot without a regular script and were largely improvised on set by the director and actors. The reason for this unusual measure: Thome's long-time screenwriter Max Zihlmann did not want to follow him to Berlin and had terminated the collaboration – making the dialogue improvisation a virtue out of necessity.

For the production of his next project, the ethnographic feature film "Beschreibung einer Insel" ("Description of an Island"), Thome founded Moana-Film GmbH in 1977 together with British filmmaker Cynthia Beatt, a label under which he has been producing his films ever since.

"Berlin Chamissoplatz" in 1980 marked the beginning of a new creative period characterized by precise but unostentatiously-made love and relationship dramas and films that trace life in Berlin. With "Tarot" (1985) Thome revisited Goethe's theme of elective affinities, a topic he had dealt with earlier in "Tagebuch" ("Diary") and "Stella" (1966) and that he investigated again in "Das Geheimnis" in 1994.

With "Das Mikroskop" ("The Microscope") Thome began his cinematic cycle 'Formen der Liebe' ('Forms of Love') in 1987, which he continued with "Der Philosoph" ("The Philosopher") in 1988 and concluded with "Sieben Frauen" ("Seven Women") in 1989. For "Der Philosoph" Thome was awarded the Prize of International Film Criticism at the 1989 Montréal Film Festival.

The various forms and variations of love continued to play a central role in Thome's films, which often also are stylistically reminiscent of the filmic reflections of the French Marivaux and Eric Rohmer, such as "Liebe auf den ersten Blick" ("Love at First Sight", 1991), "Das Geheimnis" and "Just Married" (1998). Like "venus.de - Die bewegte Frau" (2000), "Frau fährt, Mann schläft" ("Woman Driving, Man Sleeping", 2004) with Karl Kranzkowski and Hannelore Elsner as a married couple at the crossroads is a family story told and photographed in a differentiated manner that deviates from the usual clichés of this genre.

Since her role in "Rot und Blau" ("Red and Blue"), Elsner has been playing the leading role in several of Thome's works multiple times - including in the acclaimed "Das Sichtbare und das Unsichtbare" (2007). In "Pink", presented at the Berlinale 2009, Hannah Herzsprung starred in the lead role of a young poet in search of a husband.

One year later, Thome made "Das rote Zimmer", a film about a love triangle between a kiss researcher and a lesbian couple. With "Ins Blaue", a film about filmmaking that was released in cinemas in 2012, Thome remained true to the colour references in his film titles.

After "Ins Blaue", things became quiet around Thome for a few years. In 2016, in the Forum of the Berlinale, a documentary film premiered, in which he himself takes centre stage: In "Rudolf Thome - Überall Bumen" ("Rudolf Thome - Flowers Everywhere") Serpil Turhan, who worked with Thome as an actress and assistant director several times, paints a very personal portrait of the filmmaker.

In spring 2016 Thome handed over his collection of props, scripts, costumes and posters to the DFF - Deutsches Filminstitut & Filmmuseum in Frankfurt am Main. Thome was awarded an honorary prize at the German Film Critics' Prize 2018.

Rudolf Thome was married three times, he has three sons and one daughter, Joya Thome, who also works as a director.