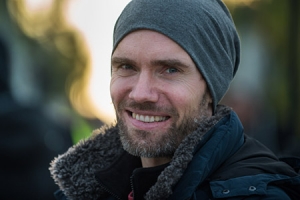 Christian Zübert was born in 1973 in Würzburg. Since 1997, he has concentrated on scriptwriting and has written numerous screenplays for film and television. Sönke Wortmann took up contact with him upon recommendation, and after receiving Zübert's script for "Lammbock - Alles in Handarbeit" ("Lammbock - Shit Happens", 2001), convinced him to take over the direction of the film, making "Lammbock" his directorial debut.

Among other screenplays, Zübert co-wrote "Mädchen Mädchen" ("Girls on Top", 2001, director: Dennis Gansel) with Maggie Peren and collaborated on the screenplay for Gregor Schnitzler's "Soloalbum" ("Solo Album", 2003). The children's adventure film "Der Schatz der weißen Falken" ("The Treasure of the White Falcons", 2005), Zübert's second directorial work and again based on his own screenplay, was awarded the main prize at the Hamburg Children's Film Festival 2005 and received a prize from the children's jury at the International Children's Film Festival Chicago 2005.

With the screenplay for "Vollidiot" ("Complete Idiot", 2007), Zübert adapted Tommy Jaud's bestseller of the same name for the big screen, immediately followed by his screenplay for "Die rote Zora" ("Red Zora"), an adaptation of a classic children's book. In 2008 Christian Zübert presented his third directorial work with the comedy "Hardcover" - again based on a screenplay written by him.

His screenplay for the brother story "Hangtime" was filmed by director Wolfgang Groos and was released in 2009. Zübert himself directed the award-winning episode "Nie wieder frei sein" (2010) from the popular "Tatort" series. He also directed four episodes of the highly acclaimed but short-lived crime series "KDD - Kriminaldauerdienst". For director Hermine Huntgeburth, he adapted Sven Regener's novel "Neue Vahr Süd", before he directed another feature film with "Dreiviertelmond" ("Three Quarter Moon"): based on Zübert's own script, the comedy tells the story of a misanthropic taxi driver whose life takes an unexpected turn after his encounter with a Turkish girl. Zübert was awarded the Bavarian Film Prize for the screenplay for "Dreiviertelmond".

After the screenplay for Ed Herzog's Bavarian crime comedy "Dampfnudelblues" (2013), Zübert directed his next film: The tragicomedy "Hin und weg" ("Tour de Force"), about a seriously ill man who sets off on a last bicycle trip with his best friends, had its world premiere at the Toronto Film Festival in September 2014 and was released in German cinemas shortly afterwards.

Zübert's next film celebrated its world premiere at the Toronto International Film Festival in September 2015: The drama "Ein Atem" ("One Breath") tells the story of a woman who sets off in Greece in search of her little daughter who has been kidnapped by her desperate Greek nanny.

Lighter fare was Zübert's next project: In early summer 2016 he began shooting the comedy "Lommbock", a continuation of his directing debut, the cult stoner comedy "Lammbock" from 2001. The film was released in German cinemas in March 2017.

After this Zübert brought Ferdinand von Schirach's novel "Der Fall Collini" ("The Collini Case", 2018) to the screen. The drama about a young lawyer who gets caught up in a plot about the Nazi past of a murdered industrialist was a success with the public and was also shown in German schools for educational purposes. For television, he created the six-part, black-humorous mini series "Arthurs Gesetz" (2018), with Jan Josef Liefers as the unemployed man who falls in love with a prostitute and wants to kill his shopaholic and bossy wife. The second season of the highly acclaimed series "Bad Banks" (DE/LU 2020) was another success for Zübert.