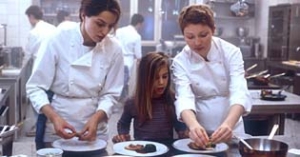 Martha, in her own slightly obsessive but charming way, creates sublime masterpieces in the art of cooking as a chef of a small gourmet restaurant in Hamburg. And yet, her everyday existence is rather monotonous. She is introverted, has hardly any private life, and exists only for her work. All of that changes when her sister, a single mother, dies in an accident and Martha has to take care of Lina, her sister′s eight-year-old daughter. The little girl suffers badly from the loss of her mother. It is only the presence of Mario, Martha′s merry Italian colleague, who brings light and pasta into the lives of the two outsiders. He turns from a rival into a loving friend. A sensitive romance starts between them, just when Lina′s long-lost father appears. He wants to take Lina back with him to Italy. And Martha? Martha has to make a decision.