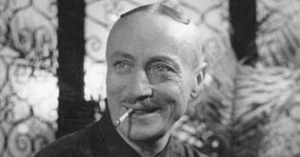 Hubert von Meyerinck was born in Potsdam on August 23 1896. After his parents' divorce, the son of a major was raised by his mother. As a young child, von Meyerinck already started taking acting lessons, much to the disdain of his parents who wanted him to become a priest. After graduating from school, he was drafted into military service in WWI, but soon was discharged for health reasons.

In 1917, he made his stage debut at the Berliner Schauspielhaus, playing the role of Lieutenant von Hagen in "Kolberg". After an engagement at the Hamburger Kammerspiele (1918-1920), he performed at numerous theatres and varieties in Berlin (including the revue "Es liegt was in der Luft" with Marlene Dietrich). He was lauded for his work in the famous cabaret "Tingeltangel" as well as for his dramatic roles in the theatre, for instance his Mephisto in "Faust" or his Mackie Messer in "Dreigroschenoper". At the beginning of the 1920s, Hubert von Meyerinck was discovered for the big screen. After his first significant role in Georg Jacoby's serial "Der Mann ohne Namen", he played supporting roles in silent films like Artur Robison's "Manon Lescaut" (1926) or Wilhelm Dieterle's "Ich lebe für Dich" (1929).

Given his distinctive appearance, von Meyerinck soon gained prominence and became an audience favourite. At the same time, he was pigeonholed into playing a certain type of roles: With his bald head, a monocle and a thin moustache, he was typecast as bourgeois, aristocrat, authoritarian figure, gallant eccentric, crook or con man. With the introduction of sound, his raspy voice became another trademark and solidified his clichéd image.

During the Nazi reign, Hubert von Meyerinck remained one of the most popular supporting actors. Between 1933 and 1945, he appeared in over 90 productions, ranging from the comedy "Ein falscher Fuffziger" (1935) and Willi Forst's adaptation of Maupassant's "Bel Ami" (1939) to Helmut Käutner's "Kitty und die Weltkonferenz" (1939). He also played smaller parts in propagandistic productions like Hans Steinhoff's "Ein Volksfeind" (1937) or Herbert Selpin's "Trenck, der Pandur" (1940).

Although it was known that von Meyerinck was homosexual, he was not prosecuted by the Nazis – unlike his colleague and friend Kurt von Ruffin, who was imprisoned in a concentration camp for nine months.


In the 1950s and 1960s, von Meyerinck successfully spoofed his authoritarian image in numerous comedies. In 1957 alone, "Hubsi" – as he was endearingly called by his fans – appeared in 13 films, including the box office hits "Der tolle Blomberg" and "Das Wirtshaus im Spessart" by Kurt Hoffmann. In 1960, he received the Prize of the German Film Critics for his portrayal of the strict office manager in "Ein Mann geht durch die Wand", and the following year, he won the same award for his performance in "Das Spukschloß im Spessart". Another highlight was his exuberant aristocrat in Billy Wilder's Cold War satire "One, Two, Three". Between 1965 and 1969, he was a regular in the popular Edgar Wallace film series as Sir Arthur, the head of Scotland Yard.

Albeit his work in the movies (he appeared in a total number of 250 films), he still found time for the theatre, and in 1966, became an ensemble member at the renowned Thalia Theatre in Hamburg. In 1968, he received a lifetime award at the German Film Prize, and the same year, he published his memoirs.

On May 13th 1971, Hubert von Meyerinck passed away in Hamburg.