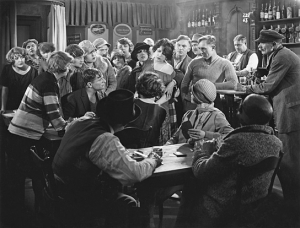 Young Else goes out dancing with her boyfriend against her father’s will. When the old despot realizes she’s gone, he locks her out of the apartment. Else moves in with Hans, who is unemployed, and his friend Max, a street hawker. The trio performs a music hall comedy routine in a horse costume that is a rousing success. Hans begins talking about marriage. But Else is still a minor. When her father sends the police to bring her home, she runs away. In desperation, she accepts the invitation of a shady talent agent. When Hans tracks her down there, he jumps to the wrong conclusion …

"Unter der Laterne" is a tale of the classic descent into prostitution. Set in the Berlin of the 'small people', the film focuses a not unattractive light on the entertainment district of dimly-lit beer halls and nightclubs, with its cheap sparkle and flickering neon. But at the same time, it highlights the dark side – the back alleys and streetwalkers, the pimps and taxi dancers, the grim world of furnished rooms and human decline. In doing so, what is ostensibly a drama of generational conflict and romance is revealed to be, at heart, a film about social strata.