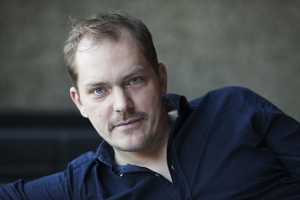 Godehard Giese, born in 1972, graduated from Hochschule der Künste Berlin (now: Universität der Künste Berlin) with a degree in acting in 2001 after four years of studying. From 2001 to 2003, he then was engaged at the Stadttheater Hildesheim, before he became a freelance actor and focused on a career in film and television.

Godehard Giese first appeared on the big screen in 2008, when he played minor parts in "12 Meter ohne Kopf" ("12 Paces Without a Head", 2009), "Lila, Lila" (2009), "Fenster zum Sommer" ("Summer Window", 2011) and "An Enemy To Die For" (2012). He was cast for more significant roles in the social comedy "Lena will es endlich wissen" (2011) and in Pola Beck's award-winning drama "Am Himmel der Tag" ("Breaking Horizons") in which he played a lecturer who is having an affair with one of his students. In the comedy "Willkommen bei Habib" ("Habib Rhapsody", 2013) Giese had an important feature part as the best friend of a manager who has been unfairly dismissed; in "Wir waren Könige" ("The Kings Surrender", 2014), a much acclaimed police thriller, he featured as a tough SWAT officer before impressing the audience with his portrayal of a Stasi staff investigating a group of illegal break dancers in "Dessau Dancers" (2014) directed by Jan Martin Scharf.

The following year, Giese won the actor's award at the achtung berlin festival for playing the lead in Tom Sommerlatte's comedy-drama "Im Sommer wohnt er unten" ("Summer Downstairs", DE/FR 2014/15), the arrogant older brother of a sympathetic bon-vivant. Aside from this theatrical release he featured in various ambitious made-for-TV movies in 2015: In Franziska Buch's biopic "Käthe Kruse" he was the protagonist's father; in the thriller "Brandmal" he impressively featured as a disoriented drug producer and alleged serial killer and in Stephan Wagner's crime film "Harter Brocken" he could be seen as a villager who recovers the loot of two murderous criminals.

In 2015, the miniseries "Deutschland 83" drew international attention and it featured Giese in an important role as a German Lieutenant-Colonel and GDR spy. He also belonged to the cast of the political thriller "Der Fall Barschel" which premiered at the Münchner Filmfest 2015, as well as the crime film "Der Bankraub" (directed by Urs Egger) which screened at Filmfest Hamburg. Both productions were broadcast on German TV in 2016.

Earlier, at the Filmfestival Max Ophüls Preis in January 2014, Godehard Giese had presented his debut as a director: "Die Geschichte vom Astronauten", a film about a writer who is confronted with her own painful past while doing research for a new novel, received the New Berlin Film Award at the achtung berlin festival. In December 2015, the film opened in German theaters.

Godehard Giese starred in the lead role of the low budget film "Oregon Pine" (2014-2016) and played the supporting role of a prosecutor in the Fritz Bauer biopic "Die Akte General". At Filmfest Hamburg 2016, Andreas Kleinert's relationship drama "Hedda" with Giese and Susanne Wolff in the lead roles had its premiere.

In 2017, he appeared in a number of films and TV productions. In January, the drama "Liebmann" ("The Strange Summer", 2016) was released in German cinemas with Giese playing a mysterious man who tries to escape his past and ends up in a village in northern France. He also starred in the critically acclaimed TV production "Wunschkinder" about a couple whose relationship is seriously strained when they try to adopt a Russian child, and he appeared in the comedy "Willkommen bei den Honeckers" as well as in Stefan Krohmer's rape drama "Meine fremde Freundin", both produced for TV. In Hans-Christian Schmid's TV mini series "Das Verschwinden" (2017) he portrayed a small town family man whose illegitimate daughter has disappeared. In the social drama "Jetzt. Nicht." (2017) he played a manager whose life is turned upside down after he loses his job. Also in 2017, the psychological drama "Die Familie" ("Under the Family Tree") premiered at festivals with Giese as a mysterious leader of a therapy group. He also starred in a small supporting role in Wim Wenders' romantic thriller “Submergence” (2017).

Two films with Godehard Giese celebrated their premiere at the Berlinale 2019: The Panorama featured the sibling story "All My Loving", with Giese as a grieving father; the Perspektive deutsches Kino section showed the medium-length feature film "Off Season", a relationship story set in Sicily.

The episode "Falscher Hase" (2019, director: Emily Atef) of the long-running German TV crime series "Tatort", with Giese in an important supporting role as a hapless would-be blackmailer, also received much praise from critics. Also in 2019, the love and migration drama "Es gilt das gesprochene Wort" ("I Was, I Am, I Will Be") and the sibling story "Bruder Schwester Herz" ("Brother Sister Heart") were released in cinemas.

In January 2020, Lena Knauss' feature-length debut "Tagundnachtgleiche" ("Equinox") premiered at the Film Festival Max Ophüls Preis with Giese in a larger role as the brother of the male lead character. After minor guest appearances in the first two seasons of the series "Babylon Berlin", he was part of the main cast with his character of a detective superintendent of the homicide squad in the third season, which was released in 2020.

In February 2021, Godehard Giese was one of the 185 lesbian, gay, bisexual, queer, non-binary and trans* signatories of the #actout manifesto and thus part of the mass coming-out on the front page of the Süddeutsche Zeitung magazine. Initiated by Giese himself, Karin Hanczewski and Eva Meckbach, the initiative positioned itself against discrimination and called for more visibility and diversity in the theatre, film and television industry.