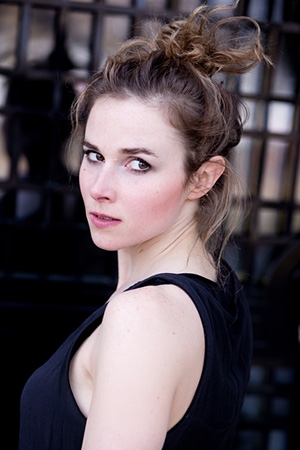 Karin Hanczewski was born December 12, 1981 in Berlin. From 2002 to 2005 she studied at Europäisches Theaterinstitut in Berlin and then went to Junges Theater in Göttingen. Her film debut was the middle length comedy "Marla" (2007), in which she played the title role of a young woman that falls in love with a man, not knowing it was him who hurt her with a stone's throw when they were children. After several other roles in short films she played the wife of a policeman in the "Tatort"-episode "…es wird Trauer sein und Schmerz" (2009) and a recurring supporting role in the series "Reiff für die Insel".

Besides some smaller turns in TV-series she was seen in feature films like "Bissige Hunde" ("Vicious Dogs", 2012), the award-winning mockumentary "Männer zeigen Filme & Frauen ihre Brüste" ("Men Show Movies & Women Their Breasts", 2013) and the comedy "Stromberg – Der Film" (2014). She was acclaimed for her performance as a wheelchair-bound radical vegan in an episode of the satirical series "Der Tatortreiniger" alongside Bjarne Mädel.

Hanczewski's first leading part in a feature film was the timid wife of an arrogant man in Tom Sommerlatte's dramatic comedy "Im Sommer wohnt er unten" ("Summer Downstairs", 2015) which won several awards. Also in 2015, she played a key role in the mini-series "Meuchelbeck".

In 2015, Hanczewski and Alwara Höfels were announced as the new investigators for the Dresden installment of "Tatort". The first two episodes aired in March and October of 2016. The award-winning film "Lotte" by Julius Schultheiß was also released in October 2016. Hanczewski stars in the title role as an impulsive and careless Berliner, whose life takes an unexpected turn when she meets an old friend and a young girl.

Hanczewski also played leading roles on TV as the oldest sister in the humorous sibling story "Familie ist kein Wunschkonzert" (2017), and as the mother of a difficult to raise 16-year-old in the thriller "Die Familie" (2017). On the big screen she was seen as the sister of the main character in "Rückenwind von vorn" ("Away You Go", 2018), as an idealistic helper during the Kosovo conflict in the bitter tragicomedy "Kill Me Today, Tomorrow I'm Sick! (2018) and as the titular sister in the triangle "Bruder Schwester Herz" (2019), alongside Godehard Giese and Sebastian Fräsdorf. Karin Hanczewski also belonged to the investigator duo of the Dresden "Tatort" productions in 2019.