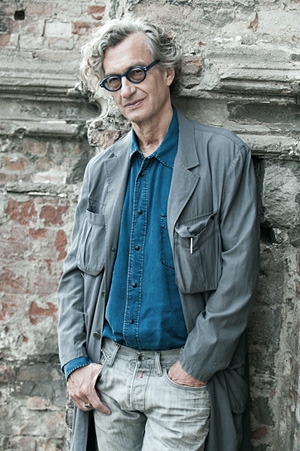 Wim Wenders, born August 14, 1945, in Düsseldorf, as the son of a physician, made his secondary school exam in Oberhausen and then studied medicine and philosophy in Munich, Freiburg, and Düsseldorf for four semesters. In 1966/67, the student and movie buff made his first short film, "Schauplätze". Wenders then went to Paris for one year where he applied in vain for the renowned film school IDHEC. But he had more success in Munich where he was accepted at Hochschule für Fernsehen und Film and started to study in 1968 (since 1993, Wenders is a professor at HFF). He already made several short films during his studies and worked as a writer for film and rock music for the well-known journal "Filmkritik", for Süddeutsche Zeitung, and for the magazine "Twen".

In 1971, Wenders finished his first feature-length film, "Summer in the City", as his graduation film for HFF. In the same year, he founded the cooperative "Filmverlag der Autoren" together with twelve other filmmakers to support the production and distribution of New German Films. In 1971, Wenders finished "Die Angst des Tormanns beim Elfmeter" ("The Goalkeeper's Fear of the Penalty"), and thus continued his collaboration with Peter Handke, a collaboration that had begun in 1969 with the short film "3 Amerikanische LPs" ("3 American LPs"). Two years later, Wenders made his artistic breakthrough with the highly-praised road movie "Alice in den Städten" ("Alice in the Cities"). In the film, like in most of his later feature films, Wenders presented his protagonists as introspective escapists whose only personal resorts are random travels, pop music, or melancholic idleness.

In "Alice in den Städten", that won the award of German film critics in 1974, Rüdiger Vogler played the seeker in quintessential Wenders style. In "Falsche Bewegung" ("The Wrong Move", 1975), based on the screenplay by Handke and motives by Goethe, Vogler played Wilhelm Meister who starts on a journey across West Germany from the North Sea to the Zugspitze mountain.

In 1975/76, Wenders finished "Im Lauf der Zeit" ("Kings of the Road") without a definitive screenplay: The journey of two men (Vogler and Hanns Zischler) along the inter-German border bemoans the closing of movie theatres in the province and at the same time reflects the social atmosphere of the mid-1970s in West Germany. "Der amerikanische Freund" ("The American Friend", 1977), based on a novel from Patricia Highsmith's "Ripley" series, draw the interest of Francis Ford Coppola who then offered Wenders at the end of 1977 to direct the film noir homage "Hammett". Several screenplay versions, the search for the right leading actor, and disagreements about the film's ending delayed and interrupted the shooting. Thus, the film did not premiere until 1982 when it was shown in Cannes – but did not became a success.

During the breaks in the production of "Hammett", Wenders finished "Der Stand der Dinge" ("The State of Things", 1982) in Lisbon: The poetic feature film about the problems of a film crew won the Golden Lion at the Venice International Film Festival. "Paris, Texas", made in 1983/84 as a German-French co-production in the USA, reflected the relation between the old and the new world, a relation pivotal for Wenders, already in its title. Until then, "Paris, Texas" was his most accessible film and some critics still view it as his best film until today – the road movie about a man who is looking for his family in the Texan province won the Golden Palm at Cannes film festival and became an international success with movie goers and critics alike. At the same time, Wender withdrew from Filmverlag der Autoren because of disputes about the concept of film distribution.

Between his feature film projects, Wenders time and again turned to personal film essays that were mostly dedicated to artists worshipped by Wenders, for instance "Nicks Film" ("Lightning Over Water", 1980) about the dying of Nicholas Ray or "Tôkyô-ga" (1983/85) about Yasujiro Ozu. Wenders also worked as a producer, actor, cinematographer, or assistant director for several other projects. Since 1974, he operates his own production company Wim Wenders-Produktion, and in 1976, he set up the production company Road Movies Filmproduktion GmbH that he administers with several changing business partners.

After "Paris, Texas", his next feature film, "Der Himmel über Berlin" ("Wings of Desire"), also became a huge success with critics and movie goers alike and soon developed into a kind of "Berlin cult movie". The poetic angel allegory in the divided city premiered at the 1987 Cannes film festival and won Wenders the award of "Best director". Inspired by this huge success, Wenders took to his science fiction poem "Bis ans Ende der Welt" ("Until the End of the World", 1991) that he had been planning for over a decade – but the global, overlong road movie fell short of his own, extremely high expectations.

In 1989, the Sorbonne university in Paris appointed Wenders as an honorary doctor of theology; later he became a member of Berlin's Akademie der Künste and the chairman of the European Film Academy. In 1990, he received the Federal Cross of Merit, and in 1991 Wenders won the Murnau award. He returned to the Berlin of angels with "In weiter Ferne so nah" ("Faraway, So Close!", 1993), and also to the Lisbon of failed movie projects with "Lisbon Story" (1995). Wenders then went to the USA to film "The End of Violence" (1997) before he followed his old companion Ry Cooder, who made the music for "Paris, Texas" and "The End of Violence", to Cuba where he finished "Buena Vista Social Club" (1998), a video documentary about the old men of the Son Cubano – the film became an overwhelming world-wide success and ushered in a revival of the Cuban "Son" music.

Wenders finished his next feature film again in the USA: "The Million Dollar Hotel" (1999), with Mel Gibson as producer and leading actor, won a Silver Bear at the 2000 Berlinale but prompted mixed reactions from critics and movie goers. Wenders then made the documentary film essay "Viel passiert – Der BAP Film" ("Ode to Cologne: A Rock'n'Roll Film", 2002), the TV documentary film "The Blues: The Soul of a Man" (2003), and "Land of Plenty" (2004), a film about America that criticizes the country's media system. Wenders again won a lot of critical praise for his next feature film, "Don't Come Knocking", a road movie in the tradition of "Paris, Texas", about an aging Western star who starts to search for his daughter. The film premiered at the 2005 Cannes film festival and won the 2005 European Film Award in the category "Best Cinematography".

In 2008 Wim Wenders returned to the screen with his existentialistic drama "Palermo Shooting" featuring "Campino" Andreas Frege as a star photographer going through a serious crisis who meets death himself, played by Dennis Hopper. At the 2011 Berlin IFF, Wenders presented his extraordinary project "Pina": Shot in 3D, the dance film showcases choreographies by the late Pina Bausch, a long-time friend of Wim Wenders. The film became a big success with critics and audiences alike and won several awards, among them the German and European Film Award for Best Documentary and an Academy Award nomination.

Wenders next worked on two documentaries: He co-produced the compilation film "Kathedralen der Kultur" ("Cathedrals of Culture", 2014) and also contributed a segment on the Berlin Philharmonics to the film, while "The Salt of the Earth" (2014, co-director Juliano Ribeiro Salgado) was an intimate portrait of legendary photographer Sebastião Salgado. The film was nominated for the Academy Awards and won a César for Best Documentary.

"Every Thing Will Be Fine" (2015) marked Wenders' return to drama with a story about an American actor (played by James Franco) whose life is derailed after he causes an accident.

His next feature film, the adaptation of Peter Handke's intimate "Die schönen Tage von Aranjuez" ("The Beautiful Days of Aranjuez", DE/FR/PT) premiered at the Venice Film Festival in September 2016 and received mostly average reviews. Alongside, Wenders also served as executive producer for the documentaries "Ein letzter Tango" ("Our Last Tango", 2015) and "National Bird" (2016). At the Toronto IFF in fall 2017, Wenders presented the international co-production "Grenzenlos" ("Submergence"), a romantic drama about the love between a Swedish bio-mathematician and a Scottish undercover agent, who is taken captive by jihadists. The film was liked by very few critics.

Wenders's next documentary received lots of attention and largely positive reviews. "Papst Franziskus – Ein Mann seines Wortes" ("Pope Francis – A Man of His Word") was commissioned by the Vatican and portraits the head of the Catholic Church who while traveling answers questions about topics like migration, social injustice, family and faith asked by people from all over the world. "Papst Franziskus – Ein Mann seines Wortes" premiered at Cannes in May 2018 and was released in German movie theaters a month later. August 2018 then eventually saw the German release of "Grenzenlos".

After that, he was involved as executive producer in the documentary film "It Must Schwing! - The Blue Note Story" (2018), which focuses on the history of the legendary American jazz label Blue Note Records.

In the documentaries "Why Are We Creative? (2018), in which Eric Friedler portrays creative people from the arts, culture, politics and other fields, and "NOW" (2019) by Jim Rakete about climate activists and the "Generation Greta", Wenders appeared as an interviewee. In March 2020, "Wim Wenders - Desperado" premiered in Copenhagen. Also directed by Eric Fiedler, this time together with German punk band frontman Campino, the two-hour documentary sheds light on the life and work of Wenders. The film includes interviews with Francis Ford Coppola, Willem Dafoe, Andie MacDowell, Patti Smith and Werner Herzog, among others.

With his production company Road Movies, he then produced the documentary "A Black Jesus", which premiered at the DOK Leipzig Festival in 2020 and follows a refugee from Ghana who wants to take part in the annual procession in a small Sicilian town with a Black Jesus statue.

In March 2021, the feature film "Souad" was screened in the programme of the digital edition of the Berlinale. Co-produced by Road Movies, it tells the story of 19-year-old Souad, who tries to explore new kinds of freedoms in her life in Egypt, which is dominated by social and family expectations.