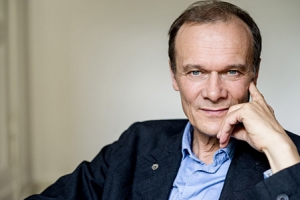 Edgar Selge was born in Brilon on March 27th 1948. After studying philosophy and German literature in Munich and Dublin, he enrolled in the acting class at the Otto-Falckenberg-Schule, Munich. Graduating in 1975, he became a member of the ensemble at the Schillertheater in Berlin. In 1979, Selge joined the ensemble of the Kammerspiele München, where he stayed until 1996. To this day, he remains a highly regarded stage actor, as proven by his most recent success as the titular hero in the acclaimed staging of Goethe's "Faust" at the Deutsches Schauspielhaus in Hamburg.

Within the next two decades, Selge also gained prominence as a versatile TV actor, appearing in memorable programmes like Helmut Dietl's "Kir Royal". Meanwhile, his film career continued with parts in "Im Kreise der Lieben" by Hermine Huntgeburth and "Abgetrieben" by Norbert Kückelmann. In 2000, Selge was awarded the German Film Award for Best Supporting Actor for his performance in the comedy "Drei Chinesen mit dem Kontrabass" ("Three Chinamen with a Double-Bass").

He sustained his success with prominent roles in Oliver Hirschbiegel's thriller "Das Experiment" ("The Experiment") and Oskar Roehler's controversial tragicomedy "Suck My Dick". He also starred in the comedies "Im Schwitzkasten" ("No Sweat", 2005) by Eoin Moore and "Reine Geschmacksache" ("Fashion Victims", 2007) by Ingo Rasper.

Since 1998, Selge also won two German Television Awards for his starring role as police detective Jürgen Tauber in the highly popular TV crime series "Polizeiruf 110", a part that made him immensely popular among German audiences. For the episode "Der scharlachrote Engel" he also received the Adolf Grimme Golden Award together with director Dominik Graf and the actresses Michaela May and Nina Kunzendorf. As Best German Actor Selge was awarded a Goldene Kamera in 2007.

The same year, the duo Selge / Graf won another Grimme Award for the "Polizeiruf 110" episode "Er sollte tot…". For his performance, Selge was also named Best Actor at the Bavarian Television Awards. The next year, he again won the award, this time for his portrayal of a phobic man on the brink of ruining his marriage in the TV comedy "Angsthasen". To much critical acclaim, Edgar Selge then starred in Marco Mittelstaedt's feature film "Im nächsten Leben" (2008), playing a former star journalist from East-Germany, who tries to regain his success after the fall of the wall. Alongside Bruno Ganz and Ulrich Tukur, Selge appeared in the satire "Der Große Kater", followed by a leading role in Chris Kraus' period drama "Poll" ("The Poll Diaries"), for which he won a Bavarian Film Award in 2010.

After portraying composer Richard Wagner in the theatrical release "Ludwig II." (2012), Selge played the role of physician Dr. Notz in the screen adaptation of the best-selling novel "Feuchtgebiete" ("Wetlands", 2013). He then had a supporting role as the father of WikiLeaks activist Daniel Domscheit-Berg in the international production "Inside WikiLeaks - Die fünfte Gewalt" (UK/B 2013), before starring opposite Iris Berben in the comedy "Miss Sixty", which was released in spring 2014. The same year, Selge received the Seoul International Drama Award for his lead performance in "Ein blinder Held - Die Liebe des Otto Weidt" ("A Blind Hero – The Love of Otto Weidt").

After playing a concentration camp survivor in the made-for-TV drama "Das Zeugenhaus" (2014), he starred opposite his real-life wife Franziska Walser in the comedy "Bach in Brazil". The couple also co-starred in "Nie mehr wie immer" (2015, TV). Other memorable TV turns of Selge around that time include "Der Fall Barschel" (2015) and "So auf Erden", the latter again co-starring Franziska Walser.

Edgar Selge also continued to enjoy success on stage: In 2016, the trade paper "Theater heute" named him actor of the year for his performance in the production of "Unterwerfung" at the Deutsches Schauspielhaus in Hamburg. The role also won him the German theatre award "Der Faust" and the Rolf-Mares-Preis.