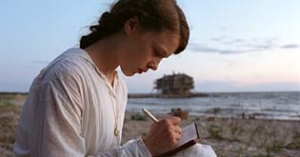 On the eve of World War I, 14-year-old Oda von Siering returns to Poll, her family home on the Baltic coast, a region uneasily shared by Germans, Russians and Estonians. With her are the mortal remains of her mother, who passed away in Berlin. Awaiting the bright and inquisitive girl are her father Ebbo, an eccentric scientist with a dubious interest in racial breeding; her aunt Milla, who flees reality through music and affairs; and other members of her aristocratic German family, who are clinging to their privileges in a world on the brink of disaster. Upon finding a wounded Estonian anarchist on the estate, the passionate, impulsive Oda fearlessly hides him and secretly nurses him back to health, aware that her deed could trigger a chain reaction of uncontrollable violence.

The Poll Diaries hauntingly evokes the end-of-days atmosphere of a doomed society at the crossroads of the German and Russian Empires in the early years of the 20th century. Following his award-winning Four Minutes (Audience Awards at the Hamptons and San Francisco, German Film Awards and Best Film Award in Shanghai and Sofia), director Chris Kraus now presents the masterly portrait of a segment of civilization and humanity sliding into chaos and anarchy.