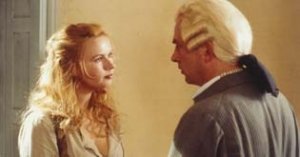 The Mask of Desire

Johann Wolfgang von Goethe had lived together with Christiane Vulpius for twenty-eight years, eighteen of these living in sin, ten as a married couple. The Mask of Desire looks at the greatest German writer through Christiane′s eyes. As a former favorite of the poet, Charlotte von Stein forces herself
between the two lovers. The rival constantly makes life difficult for
Christiane. Someone other than the strong Christiane would have probably
collapsed in the face of the unreasonable demands which her lover
Goethe also asks her to accept: if an important visitor comes, she and
their son have to disappear into the servants′ quarters; on official
occasions, she stays at home. But Goethe finally marries her when she
saves his life during an attack by plundering Napoleonic soldiers.

Now,
she is allowed to accompany him to all festivities. At the same time,
she is openly attacked by snooty, jealous people and Goethe is only
half-hearted in coming to her defence. But she stays with him - for he
is her great love - even when she grows old and he is not so strict
about resisting the charms of youthful admirers...