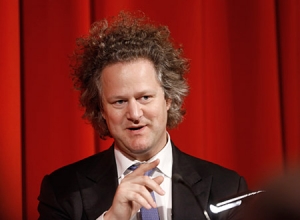 Florian Henckel von Donnersmarck at the Deutsches Filmmuseum, Frankfurt a.M. on May, 21, 2015

Florian Henckel von Donnersmarck was born in Cologne in 1973 and spent his childhood in New York, Berlin, Frankfurt/Main and Brussels. After Russian Studies at the National IS Institute in Leningrad (now St. Petersburg) from 1991-1993, he studied Philosophy, Politics and Economics at the University of Oxford. In 1996 he graduated as M.A. Following a period of practical study of direction at the Richard Attenborough film "In Love and War" in 1996, Henckel von Donnersmarck took up studies in Directing at the Academy of Television and Film (HFF/M) in Munich in 1997.

He produced and directed several short films, like "Mitternacht" ("Midnight", 1997), "Das Datum" (1998) - all in co-direction with his brother - and "Doberman" (1999), which was awarded the Max Ophuels Award as well as the Shocking Shorts Award from Universal Studios in 2000. The latter led to his next short film "What the Witness Saw", commissioned by Universal as part of the "Urban Myth Chillers" series. In 2002, he and his brother Sebastian received the Eastman Promotional Award at Hof for the short "Der Templer" ("The Crusader", 2002).

His feature film debut "Das Leben der Anderen" ("The Lives of Others", 2005/2006) starring Ulrich Mühe, Sebastian Koch and Martina Gedeck received four awards at the Bayrischer Filmpreis 2006d – two of them ("Best Script" and "Best Newcomer") were awarded to Henckel von Donnersmarck himself – as well as seven Lolas at the Deutscher Filmpreis 2006, where Henckel von Donnersmarck received the award for "Best Director" and "Best Script".

In 2007 Florian Henckel von Donnersmarck is honoured with an Oscar as "Best Foreign Language Film" for his Stasi drama at the 79th Academy Awards.

Following this success, von Donnersmarck relocated to Los Angeles, where he received many offers. At the end of 2010, he presented his Hollywood debut, the prominently cast thriller "The Tourist". Although the film garnered three Golden Globe nominations, including "Best Film – Comedy/Musical", it received mostly negative reviews and did not perform well at the box office.

Subsequently, Florian Henckel von Donnersmarck withdrew from active film production for a couple of years. In 2015, he published his book "Kino!", a collection of personal essays on cinema and his own creative influences.

In early 2016, Donnersmarck and Sam Raimi announced the formation of their joint production company Allegory Films. The same year, Florian Henckel von Donnersmarck returned to the director's chair and began production on "Werk ohne Autor", a drama inspired by the biography of artist Gerhard Richter.