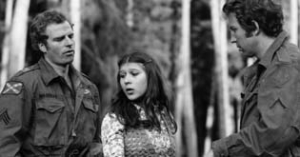 The Vietnamese girl Mao was kidnapped by four American soldiers, raped, stabbed and finally shot, on 18th November 1966. Erikson was the fifth soldier. He tried in vain to help the girl, but he reported the event to his commanding officer. His report was suppressed. The film shows Mao’s tortures. In the film her death is happens on Easter Monday and her suffering is presented in the manner of the Bavarian passion play.