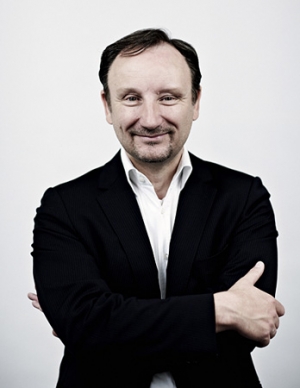 Rainer Bock, born in Kiel on July 31, 1954, ran a café in his home town before he started acting at the suggestion of some guests from the local theatre scene. After attending an acting school, Bock got his first engagement at the playhouse of the state capital Kiel in 1982, followed by the Schleswig-Holsteinisches Landestheater.

After working in Heidelberg and at the Mannheim Nationaltheater, he had a permanent engagement at the Stuttgart Staatstheater from 1995 to 2001. Bock was a member of the Bayerisches Staatsschauspiel ensemble from the 2001/02 to the 2011 season. Here he was on stage in classical productions such as Schiller's "Kabale und Liebe" and modern plays such as "Leichtes Spiel. Neun Personen und eine Frau" by Botho Strauß.

In addition to his theatre work, Rainer Bock has occasionally appeared in small cinema and television roles since 1996, for example in Jo Baier's "Stauffenberg" (2004) or Quentin Tarantino's "Inglourious Basterds" (2009). His embodiment of the village doctor in Michael Haneke's award-winning drama "Das weiße Band" ("The White Ribbon", 2009), which garnered him a nomination for the German Film Prize as "Best Supporting Actor", attracted a great deal of attention. Bock also played a prominent role in Thomas Arslan's crime film "Im Schatten" ("In the Shadows"), which premiered at the Berlinale 2010. In the same year, he could be seen as the father of a rape victim in the award-winning "Tatort" episode "Nie wieder frei sein".

In 2011, Bock belonged to the ensembles of three films in the Berlinale Competition: as a criminal defence lawyer in the Red Army Faction drama "Wer wenn nicht wir" ("If Not Us, Who"), as head of security at a luxury hotel in the thriller "Unknown Identity" and as SS Hauptsturmführer in the tragicomedy "Mein bester Feind" (AT/LU). In 2011, he also played a music professor in the love drama "Tabu - Es ist die Seele ein Fremdes auf Erden" ("Tabu: The Soul Is a Stranger on Earth") and participated as a doctor in Christian Petzold's part of the "Dreileben" trilogy, "Etwas Besseres als den Tod" ("Beats Being Dead"). He also made a small appearance in Steven Spielberg's epic "War Horse" ("Gefährten", US 2011).

In the following years, Rainer Bock remained very active as a cinema actor, often impersonating dignitaries, civil servants or other authority figures: His roles included a Berlin commissioner in Brian De Palma's thriller "Passion" (2012), a Stasi officer in Christian Petzold's "Barbara" (2012) and a prosecutor in Til Schweiger's action film "Schutzengel" ("Guardians", 2012). Bock has appeared in international co-productions as a camel trainer in the Australian desert drama "Tracks" ("Spuren", 2013), as a major in the fantasy film "Hansel & Gretel: Witch Hunters" ("Hänsel und Gretel: Hexenjäger", 2013) and as a mayor in the historical drama "The Book Thief" ("Die Bücherdiebin", 2014). In Pepe Danquart's bestselling film adaptation "Lauf, Junge, lauf! ("Run, Boy, Run!", 2013) he played an SS officer, in Maximilian Erlenwein's psycho-thriller "Stereo" (2014) a policeman whose daughter is dating an ex-con. Bock had an important role as German intelligence chief in Anton Corbijn's spy thriller "A Most Wanted Man" (2014).

Also in 2014, Bock played GDR officials in two films: In the youth film "Dessau Dancers" (2014) he impersonates a sports teacher who is assigned to use a group of young break dancers for political purposes in the GDR of 1984; in Christian Schwochow's tragicomedy "Bornholmer Straße" (2014, TV) he plays a border major. In the same year Bock slipped into the role of Otto von Bismarck for the TV miniseries "1864 - Liebe und Verrat in Zeiten des Krieges" (2014).

In addition, Bock had guest roles in a variety of other series and appeared in numerous television films, for example as a concentration camp commandant in Philip Kadelbach's "Nackt unter Wölfen" (2015), as a public prosecutor in the abuse drama "Operation Zucker - Jagdgesellschaft" (2015) and as a desperate husband and father in the much-praised psycho-drama "Kaltfront" (2016).

On the big screen, Bock could be seen as a doctor in the road movie comedy "Der geilste Tag" ("The Most Beautiful Day", 2016) and as a frustrated family man in the comedy "Einsamkeit und Sex und Mitleid" ("Sex, Pity and Loneliness", 2017). For the latter role he was nominated for the German Film Award as Best Supporting Actor in 2017.

In the following years he also guest starred in numerous TV series, including international productions such as the British alternate history mini-series "SS-GB" (2017), in which the Nazis won the war and occupied England, or in the spin-off of the famous US series "Breaking Bad", "Better Call Saul" (2018). In the German series "Das Boot" (2018), based on the Oscar-winning feature film of the same name, he plays the commander of a naval base.

After starring in Florian Henckel von Donnersmarck's Oscar-nominated "Werk ohne Autor" (2018), Rainer Bock took on the lead role in David Nawrath's "Atlas" ("The Mover", 2018). In the drama/thriller, he plays an aging furniture remover, who runs into his son, whom he once abandoned, but also comes into conflict with a shady real estate company. Bock was awarded Best Actor at the Turin Film Festival for his powerful performance.

In 2019, he starred in the comedy "Rate Your Date" as well as in the judicial drama "Der Fall Collini" ("The Collini Case"). In the same year, Rainer Bock received a nomination for the German Film Award for his leading role in "Atlas".