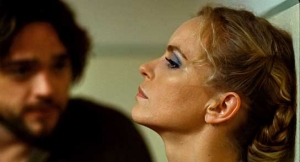 Summer in the GDR in 1980. Barbara, a doctor, has submitted an application to emigrate to the West. She is punished by being posted away from the capital to a hospital in a small town. Jörg, her lover in the West, is busy planning her escape via the Baltic Sea. It’s a waiting game for Barbara. Her new flat, the neighbours, summer and the countryside no longer hold any charms for her. Although she is attentive to her young patients in the department for paediatric surgery under her new boss, André, she is deliberately cool to her colleagues. Her life, she thinks, will begin later.

André confuses her. First there’s his unshakable faith in her professional abilities, then there’s way he cares, and his winning smile. What makes him cover up for her when she helps Stella, a young runaway? Is he spying on her? Is he in love? Barbara begins to lose her grip on herself, her plans and her heart. The day of her planned escape approaches.

After "Gespenster" (2005) and "Yella" (2007) this marks Christian Petzold’s third outing in the Berlinale’s Competition programme. His new work once again centres on a woman who seems to drift through life like a phantom. Hers is a life in which the fear of surveillance seems to be firmly embedded in all interpersonal relationships.