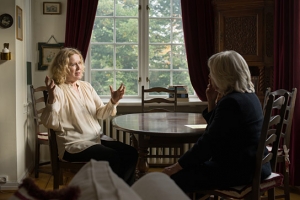 Documentary film about the life and work of Swedish filmmaker Ingmar Bergman, who would have turned 100 on July 14, 2018. Margarethe von Trotta and Felix Moeller trace Bergman's life in a very personal manner. According to von Trotta it was seeing Bergman's "Det sjunde inseglet" ("The Seventh Seal", SE 1957), which made her want to become a filmmaker herself. Bergman later returned the compliment by saying that von Trotta's "Die bleierne Zeit" ("Marianne & Juliane"1981) had impressed him like few other films. Von Trotta and Moeller interview family members, friends and colleagues about Bergman's work and talk with current directors, such as Olivier Assayas, Mia Hansen-Løve and Ruben Östlund about Bergman's influence on their own films.