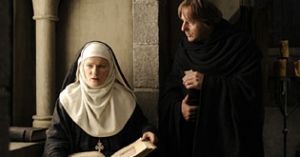 Hildegard von Bingen (1098-1179) is one of the most famous mystics of the German middle ages. In her movie Margarethe von Trotta portraits the life of this extraordinary woman, who was praised as a saint already during her lifetime. Born as a daughter of a noble family, she is raised in a Benedictine monastery, where she experiences her first visions. Encouraged by the monk Volmar, she publishes these visions and becomes a figurehead of female religiousness. In 1150 she sets up her own monastery for women near Bingen, where she lives and works as an abbess and healer. She also composes and writes books. But her popularity has consequences. The catholic church shows hostility towards Hildegard von Bingen because of her achievements. But she endures all harassment and unflinchingly follows her destiny.