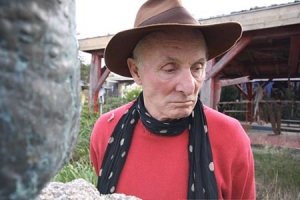 Herbert Achternbusch, born November 23, 1938, in Munich, wanted to become a painter and poet after finishing secondary school. But from 1960 to 1962, he consecutively studied at Pädagogische Hochschule München-Pasing, at Nuremberg's Kunstakademie, and for three semesters at Munich's Akademie der Bildenden Künste instead. Then, from 1962 on, Achternbusch worked in several jobs before colleagues and friends such as Martin Walser advised him to become a writer rather than a painter.

In 1969, Suhrkamp published "Hülle", a collection of stories, Achternbusch's first publication of meanwhile more than 50 books. Shortly after the publication, Achternbusch started to make films on substandard film and became part of the German auteur film scene. Achternbusch then played parts in films by Werner Herzog and Volker Schlöndorff and wrote the screen play to Herzog's "Herz aus Glas" ("Heart of Glass").

In 1974, Achternbusch made his first feature film: "Das Andechser Gefühl" featured Margarethe von Trotta who developed the screen play with him and Achternbusch himself in the leading parts. Achternbusch also starred in the leading roles of his following films. More and more, the versatile artist became a provocative maverick of the established culture scene and is also a disputed figure of the film scene: In 1977, he burned the "Petrarca" prize right after receiving it from the hands of Peter Handke. Six years later, his film "Das Gespenst" ("The Ghost") caused a nationwide scandal because of his "disrespectful" portrait of Jesus. Since then, the film artist is consistently ignored by all promotion boards.

On a small budget, he shot his next films on Super-8 and had them blown-up to 35mm for theatrical release. Achternbusch managed to make numerous films without public funding this way. With his trademark mixture of humour and bitter social criticism, he often has been tackling political and social topics, and targeted bigotry, philistinism and nationalism.

Among his most important works are "Wanderkrebs" (1984), a satirical comedy about how the Bavarian government installs (toxic) plastic trees as a reaction to forest dieback, and "Heilt Hitler!" (1986) about a Wehrmacht soldier, who after having been in a coma for 40 years, wakes up and believes modern Munich to be the newly erected Stalingrad. Achternbusch then starred in "Punch Drunk" (1987) as a Bavarian politician in Munich after the Chernobyl disaster. "I Know the Way to the Hofbrauhaus" (1991) focuses on the bizarre experiences of a tourist guide. In "Hades" (1995), Achternbusch played a Jewish coffin maker, who sees himself confronted with a newly rekindled fascism. "Picasso in München" ("Picasso in Munich", DE/AT 1997) showed Achternbusch in the leading role as the famous painter, who wakes from the dead in Munich. "Neue Freiheit - Keine Jobs" (1998) tells the story of a homeless man, who protests against Chancellor Helmut Kohl.

Four years later, after what can be considered an unusually long break for him, Achternbusch presented his last film: "Das Klatschen der einen Hand" (2002) criticizes the irrelevance of theatre and praises non-theatre.

On the occasion of his 70th birthday, the Museum of Modern Art in Passau put on an exhibition showcasing his paintings from 1990 to 2008, while the Munich International Film Festival showed a comprehensive retrospective of his films.

Still, Achternbusch remains a controversial figure even within the filmmaker scene as some find his work to be too obviously absurd and thus not shocking or amusing at all, whereas others praise his direct style and his refreshing defiance. One thing is certain though: Unlike many of his contemporaries, he has never succumbed to the "system". All of his films express a very obvious love for cinema and it is not by accident that he has written texts about Kurosawa, Fassbinder and his personal role model Karl Valentin.

After retiring from filmmaking in 2002, Achternbusch continued his work as an author of award-winning novels, poetry, children's books and the occasional theatre review for the German newspaper Süddeutsche Zeitung. As an author he was awarded the 'Ernst-Hoferichter-Preis' (1999) and the 'Kasseler Literaturpreis für grotesken Humor' (2010). His last theatre play "Dogtown Munich" premiered at the Munich Volkstheater in February 2017.

Herbert Achternbusch was father to six children. From 1975 to 1981 he lived with his wife Gerda in a former pub in Buchendorf. After they divorced, Achternbusch moved to Ambach where he lived with Annamirl Bierbichler during the 1980s. In 1990, he moved to Munich and he also started renovations on a house in the Austrian Waldviertel. Bierbichler and Achternbusch separated and he married Judith Tobschalle in 1993. In 1994, their daughter Naomi Achternbusch was born who also works in film as an actress. However, the marriage lated only four years.

On January 10, 2022, the nonconformist director, writer, and painter Achternbusch died in Munich at age 83.