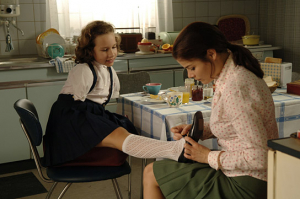 Adolf Winkelmann′s two-part TV movie is a fictional account of the so-called Contergan scandal, one of the largest pharmaceutical scandals of the German post-war era – although there are obvious similarities to actual companies and persons. The actual "Contergan company" Grünenthal tried in vain to prevent the airing of the drama.

The film is centred on attorney Paul Wegener who sets up his own office together with his friend Horst Bauer in 1960. When Wegener′s wife has a baby missing both arms and one leg, research corroborates the suspicion that the drug Contergan by the Grünthal company is accountable for the deformity. Although Grünthal had been a lucrative client of his office, Wegener decides to bring the company before the court – while his friend Bauer changes sides and starts to work for the pharmaceutical giant. During the exhausting lawsuit, that is carried on by Grünthal with dirty tricks, Wegener′s Ehe is rapidly deteriorating. Eventually, Wegener reaches an out-of-court settlement with the company. In 1970, the lawsuit is stopped because of the "small debt" of the accused persons and "the lack of interest for the general public".