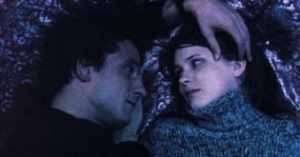 "June Moon" tells the tragic-romantic story of Paul und Nele, two loners who rediscover a lost faith in the power of love. The two of them have nothing to lose and risk everything...

Fleeing from his past and traumatic memories of his deployment as a KFOR soldier in Kosovo, Paul moves from Berlin to the small town of Paderborn. One day from the kitchen window, he notices and observes his neighbor, Nele.
Gradually, something like trust and friendship develops between the two and they begin to open up to each other more and more. But a relationship is out of the question for both of them as they believe that the beginning of a love affair is always the beginning of a painful ending.
It is only when Paul is diagnosed with a terminal illness that the two at last admit to their feelings for one another.