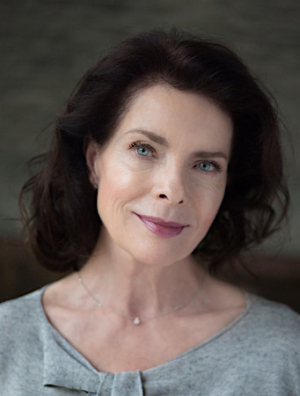 Source: Above the Line, © Nadja Klier

Gudrun Landgrebe was born on 20 June 1950 to a couple of civil servants in Göttingen. She spent her childhood and youth in Bochum. From 1968 to 1971 she attended the "School of Theatre" in Cologne, from where she started a stage career. Between 1971 and 1981 she appeared on stage at various theatres in Wuppertal, Bruchsal, Hof, Detmold, Feuchtwangen, Pforzheim and Dortmund, performing in plays such as Wedekind's "Frühlings Erwachen" and Bruckner's "Krankheit der Jugend".

Landgrebe, who, in her own words, always wanted to be in the movies, made her small screen debut in Peter F. Bringmann's TV film "Aufforderung zum Tanz" ("Invitation to Dance", 1977), as the hairdresser and lover of Marius Müller-Westernhagen's main character. In 1981 she had her first leading role in the relationship story "Dabbel Trabbel" (director: Dorothea Neukirchen). Shortly thereafter she was cast in the lead role by Robert van Ackeren for his highly acclaimed and controversially discussed film "Die flambierte Frau" ("A Woman in Flames", 1983): Her multi-layered portrayal of the high-end call girl Eva not only brought Landgrebe international attention, but her reserved and equally sensual, self-confident and intelligent character was also stylized by the press and the audience as the "new type of woman of the 1980s".

Indeed, Landgrebe's range of roles was much wider. Burkhard Driest cast her in the leading role of "Annas Mutter" (1984), based on the true story of Marianne Bachmeier, who shot the murderer of her little daughter in the courtroom and became a kind of questionable heroine because of this. Landgrebe also played an important role in Edgar Reitz' much-praised television series "Heimat" ("Heimat: A Chronicle of Germany", 1984), as the first great (and tragically ending) love of the main character Hermann. István Szabó cast her in "Oberst Redl" ("Colonel Redl", HU/AT/DE 1985) as the baroness and temporary lover of the title character. She played a leading role in Liliana Cavani's "Leidenschaften" ("The Berlin Affair", IT/DE 1985), about the ménage à trois of a diplomatic couple with the daughter of an ambassador.

In some other films Landgrebe - in accordance with her image from "Die flambierte Frau" - played the beautiful and inscrutable woman, a kind of modern femme fatale. For example, as the criminal string-puller in Hans-Christoph Blumenberg's "Tausend Augen" (1984), as the accomplice of a bank robber (Götz George) in Dominik Graf's "Die Katze" ("The Cat", 1988) and, a humorous version, in "Rossini, oder die mörderische Frage, wer mit wem schlief" ("Rossini", 1996) by Helmut Dietl. For the latter two films she received a nomination for the German Film Award as Best Actress in a Leading Role.

Landgrebe showed her comedic talent as an uptight mother in Marc Rothemund's "Das merkwürdiges Verhalten geschlechtsreifer Großstädter zur Paarungszeit" ("Love Scenes From Planet Earth", 1998), as a therapist in the humorous love story "Wer liebt, dem wachsen Flügel" ("On The Wings Of Love", 1999) and as an eccentric artist in Lars Kraume's media satire "Viktor Vogel - Commercial Man" (2001), in which she appeared once more alongside Götz George.

In addition to these film productions, Gudrun Landgrebe also appeared in many TV films and series, among them Xaver Schwarzenberger's marriage drama "Fever" (AT/DE 1998), Urs Egger's terrorism thriller "Opernball" ("Opera Ball", 1998) and Wolf Gremm's psychodrama "Die Sünde der Engel" (1998). With Günther Maria Halmer she starred in the romantic comedies "Herz oder Knete" (2002) and "Alles Samba" (2003), and with Götz George in the romantic comedy "Verliebte Diebe" (2003). For her portrayal of the Danish Queen Margarete in the two-part "Störtebeker" (2006), Landgrebe was nominated for the Austrian television award Romy.

On the big screen, she was part of the ensemble of Hans-Christoph Blumenberg's celebrity satire "Warten auf Angelina" ("Waiting for Angelina", 2008) and Christian Schwochow's "Die Unsichtbare" ("Cracks in the Shell", 2011), a drama set in the theatre milieu. In Oskar Roehler's "Jud Süss - Film ohne Gewissen" ("Jew Suss – Rise and Fall", 2010) she impersonated the lover of the actor Ferdinand Marian. Also in 2010 she was awarded the Honorary Prize of the Hessian Minister President for special achievements in the film and television sector at the Hessian Film Awards.

In 2011 Landgrebe starred as a Jewish, communist music teacher in Marcus O. Rosenmüller's "Wunderkinder" (2011), a drama set in the Nazi era. In the following years, she mainly appeared on TV. She had leading roles in Carlo Rola's mystery drama "Der Mann ohne Schatten" (2014) and the comedy "Endstation Glück" ("Destination Happiness", 2016). Again alongside Götz George she was seen in a smaller supporting role in the adventure movie "Böse Wetter" (2016). She had roles as a shady psychotherapist in the mystery six-part film "Weinberg" (2015) and in the satirical political series "In bester Verfassung" (2019), as a constitutionalist who invents an Islamist provincial terror cell in order to be able to keep her quiet small town post.